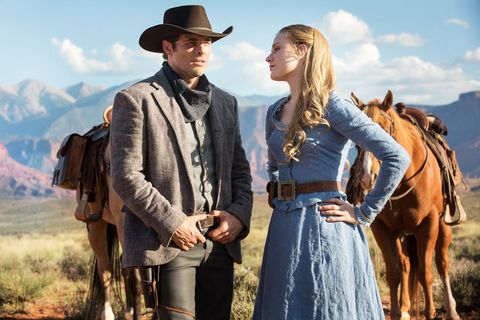 2. They hired "special extras" to film the scene, not to mention a sex choreographer. "We hired what they called 'special extras,' 'special background players,' who were willing to participate," Lewis explains. "We also had a sex stylist who made sure things looked properly choreographed in that regard. It was all hands on deck, to say the silly pun. We were trying to make things feel elegant, and graceful, and beautiful, and strange."

3. They wanted it to be sensual, not pornographic. "I think all of us have a modicum of taste that keeps us from taking it too far into the pornographic world, and keeps it in the sensual world," Lewis explains. "I think that's important."

4. The extras were thrilled to take part. "It's bizarre, dude!" Westworld actor Jimmi Simpson (AKA William) tells Vulture. "They send out the flyers saying, 'Hey, would you get naked on film?' Then the people that are there that night are all the people that said, 'I will.' It's a bunch of proud, naked, human adults, in a room together. Some are made-up, some have gold genitals even, or are wearing masks of animals. They're all there, and they're glad to be there. It's just like they were all wearing T-shirts and jeans, but instead of T-shirts and jeans, they had naked bodies."

5. Mirkins abounded. "In this case you're not testing clothing so much, it's what we call the 'furry bikini'—they put on a merkin and you look at the way their [body] paint is laid out," showrunner Lisa Joy tells EW. "I think people imagine when something is sexy on screen that it might be sexy on the day, but it's not. It's a bunch of people putting on robes and going to craft services and staying warm, and then doing their thing."