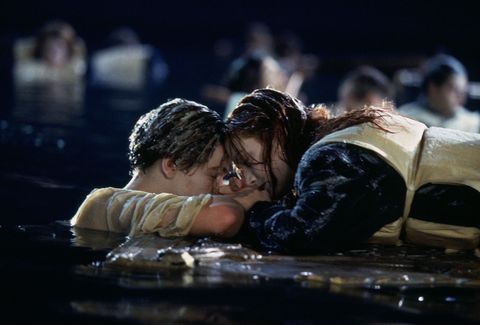 It's a truth universally known that Rose could have definitely moved over and let Jack on her raft instead of, you know, LEAVING HIM TO DROWN. Also, we're talking about Titanic right now, in case that wasn't clear.

Much research has been done into whether or not there was room on that raft (hint: there was), and MythBusters even devoted an entire episode to it—determining that yes, Rose could have perhaps shared her space. But apparently James Cameron isn't here for our "theories"—despite being featured on that episode of MythBusters.

"Look, it's very, very simple: you read page 147 of the script and it says, 'Jack gets off the board and gives his place to her so that she can survive,'" he told The Daily Beast. "It's that simple. You can do all the post-analysis you want."

Oh, analysis like looking at this GIF and realizing there is all the room in the world for poor Jack?

"You're Jack, you're in water that's 28 degrees, your brain is starting to get hypothermia, MythBusters asks you to now go take off your life vest, take hers off, swim underneath this thing, attach it in some way that it won't just wash out two minutes later," Cameron continued. "[That] means you're underwater tying this thing on in 28-degree water, and that's going to take you five to ten minutes, so by the time you come back up you're already dead. So that wouldn't work. His best choice was to keep his upper body out of the water and hope to get pulled out by a boat or something before he died. They're fun guys and I loved doing that show with them, but they're full of shit."

Damn, James Cameron, tell us what you really think.

Mehera Bonner Contributor Mehera Bonner is a news writer who focuses on celebrities and royals—follow her on Instagram.
This content is created and maintained by a third party, and imported onto this page to help users provide their email addresses. You may be able to find more information about this and similar content at piano.io
Advertisement - Continue Reading Below
More From Culture
It's Time To Binge Hulu's Best Documentaries
When Will 'The Crown' Season 5 Be on Netflix?
Advertisement - Continue Reading Below
'The Undoing' Season 2: Everything We Know
Cute Gift Ideas for Every Woman in Your Life
'The Undoing' Differs Sharply From the Book
'The Undoing' Is Packed With Stars
Differences Between 'The Undoing' Book and Novel
It's Been a Weird Year for 'The Bachelorette'
Did Princess Diana Really Dance to 'Uptown Girl'?
'Bachelorette' Frontrunner Brendan Is an Actor