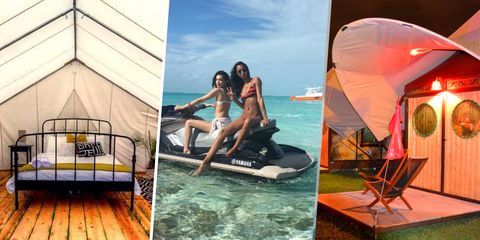 Part of the charm of music festivals is leaving with lifelong memories, a whole weekend's worth of dust and filth in your hair, and sore quads from squatting over toilets with half a foot of refuse on the floors. But wouldn't it be even easier to be #grateful if you didn't have to wait in a holding pen with a few hundred thousand people nor miss an act waiting in line to get a slice? Here, the most exclusive experiences you can have—if you can show 'em the money.

Your Own Air-Conditioned Yurt at Coachella

When it's 100-plus degrees of dry heat and they're out of tequila (which happened this year COUGH), A/C becomes a commodity for which you might pay "price upon request," three of the most intimidating words in the English language. But this package also offers tons of other sick amenities, such as artist access so you can get close enough to pretend you don't give a shit about being in touching proximity to Skepta, maid service, security, and a personal golf cart driver to save your shoes.

"Dinner with at Least One Performer" at Fyre Festival

Sold, especially if it's with Migos—and you've got $400K to spare. Even at its most basic, the "immersive festival" in the Bahamas isn't for the light of wallet, but the Artists Palace is about as all-access as you can get without having the connects to get those things offered to you for free. Transportation to the island "once owned by Pablo Escobar" is all taken care of (think yachts and choppers, not economy class), as is running into celebrities and possibly the models involved in the cool but vague marketing campaign. And who knows? Maybe a Kardashian-Jenner or two might show.

A Private Tour Bus for You and 7 Friends at Bonnaroo

If you've always wanted to play Mick Jagger but haven't got the talent or stamina for it, there's always the Tennessee festival's Roll Like a Rock Star plan. A decked-out tour bus. A private entrance to the festival. Parties and open bars. Whatta life.

Cool Tents™ + logistical help + free booze + meeting/standing quietly near your personal heroes = the gist, essentially, but this glamping experience comes with a Himalayan pink salt lamp for your nerves and clogged nasal passages. Plus, if it already looks that good in the 360-degree tour, just imagine how lit it is IRL.

Jury's out on whether they'll offer the contest again this year, but in the past, C3Presents has given six lucky winners access to a private bathroom with a highly Instagrammable gold interior and chandelier. Sounds fun, but the best bit is that only a handful of people can use it—and you get to handpick who. Compare that to the usual case, in which it is dark, you're afraid to think of what particulates you're inhaling, and there's a 50-50 chance the flush won't work. (Caveat: The ones you can access with a Platinum pass are temperature-controlled, so that's nice too.)

This content is created and maintained by a third party, and imported onto this page to help users provide their email addresses. You may be able to find more information about this and similar content at piano.io
Advertisement - Continue Reading Below
More From Guide to Coachella 2020
Kylie Jenner's Adorned Braid for Coachella
How to Watch Coachella 2019 Live
Advertisement - Continue Reading Below
Why Solange Isn't Performing at Coachella Anymore
The Best Street Style From Coachella 2018
All the Celebrities at Coachella This Year
The 5 Coolest Beauty Trends at Coachella
How to Create Coachella Braids in Four Easy Steps
Rihanna Looks Unrecognizable at Coachella
Leonardo DiCaprio Saw Coachella in 3D
Kylie Jenner Debuts Denim Blue Coachella Hair