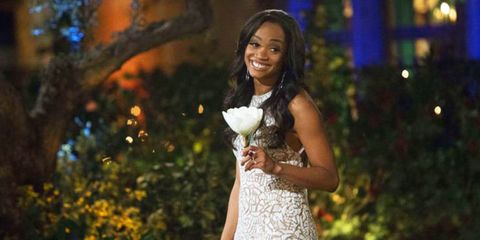 Since its inception in 2002, ABC's The Bachelor and The Bachelorette have faced significant criticism for the lack of diversity among love-seekers and their suitors. When people of color have been suitors, they've largely been eliminated within a few weeks of each season premiere. In 2012, two black men initiated a class action lawsuit against the show, but that case was dismissed because, as the judge noted in his ruling, casting decisions are protected by the First Amendment. Now, five years later, ABC has finally found a person of color: Rachel Lindsay, a black woman they deem marketable enough to feature on their show without alienating an audience that—despite believing two strangers can find love on reality TV—might not tolerate interracial romance.

At long last, a black woman has the opportunity white women have long enjoyed: to be wooed in front of television cameras by a bevy of blandly attractive, muscular men with hairless bodies, vague job titles, fake tans, and eerily similar haircuts. This is what true equality looks like.

"It seems frivolous at best to care about a reality dating show. And yet, we deserve to be entertained even as the world burns."

Given the current political climate, it might seem that this pop culture milestone is insignificant. Fascism is on the rise. A petty tyrant is president of the United States. So much is so precarious for so many people. It seems frivolous, at best, to care about a reality dating show. And yet, we deserve to be entertained even as the world burns. There is enough room in our collective imagination to care about the fate of the world and the fate of Rachel Lindsay's heart. And care we do.

Or at least, I do. Rachel comes across as genuinely likable and interesting. She seems far less scripted than most of the people who have appeared on The Bachelor/ette and is capable of holding a conversation—another rarity. I'm rooting for this woman to find love, or to at least have one hell of an adventure in the trying.

But what we're really talking about here is representation. This season of The Bachelorette offers a much-needed opportunity for black women and the rest of the TV-watching American public to see someone who looks like them—portrayed as having a complex inner life and worthy of being wanted by eligible men. We'll be able to see a black woman treated as marriage material. Rachel Lindsay as The Bachelorette marks a necessary shift in, and expansion of, the cultural conversation about black womanhood.

Though this new season of The Bachelorette is groundbreaking, it's also more of the same delightfully absurd show we have long become accustomed to. During the premiere, Rachel spends a lot of time talking about how she hasn't yet found love because she's been so focused on her career. Translation: She doesn't have it all. But by the grace of The Bachelorette, maybe, just maybe, that will change. For someone who has already done this once, she is freakishly optimistic about her prospects without taking the show or herself too seriously.

And to the show's credit, they did a good job rounding up potential suitors for Rachel. The group is—at least within the context of the show's history—incredibly diverse. The 31 men vying for Rachel's affection include fitness lover Alec, who says, "When people first meet me, they do tend to stereotype me as a meathead but I am actually a huge nerd. I like to code, I like technology, science, math, computers, Rubik's Cubes…." Because of course. Who doesn't? Alex is typical of the guys on this show every season—blessed with a disproportionate amount of self-confidence and self-seriousness.

Mohit, the startup guy, is also a Bollywood dancer who loves family. There are several lawyers in the group. They love family too. All of the men love family! There are a few men who are emphatically indistinct. There's always at least one weirdo in the bunch, and this year, that spot is firmly occupied by a guy named Lucas who randomly says the catchphrase "wa-boom," and sometimes verbally ejaculates with a bizarre performance that involves shaking his head vigorously. Apparently, no one in his life has ever cared enough about this man to tell him to never do this again.

Blake, a personal trainer, spends his introductory video babbling about how because he works out so much his libido is high. Then, in a not-to-be-believed moment, he says, "I don't want to come across as the guy who talks about his penis, but how many women have told me about the amazingness of my penis?" This bizarre rhetorical question is an anaphrodisiac of the highest order. Meanwhile, Diggy likes to look good and owns 575 pairs of sneakers, but he's also ready to settle down. Kenny is a professional wrestler with a daughter. You get the gist. These are a bunch of stereotypically Bachelorette-y men and they all want to date Rachel.

As each of the contestants introduces himself to her, we are treated to the thoroughly modern spectacle of two strangers meeting under highly scripted circumstances. There's a guy who wears a costume, and a guy who plays guitar, and a guy who does a Steve Urkel bit. There are a criminal number of bad jokes and earnest entreaties. One seemingly serial-killer-in-the-making tickles her. She is gracious under this unbearably awkward pressure and clearly appreciative of being able to avail herself of such a buffet of man flesh. That is to say, she makes the most of the occasion—vocally appreciating the especially attractive men, snarking on the strange and silly men, and laughing at the weirdness of it all.

During the cocktail party, the suitors are left to talk amongst themselves and drink copious amounts of alcohol as they discuss, at length, Rachel's charms, beauty, desirability, the number of handsome competitors in the room, and their individual chances at ending up with her. Seriously, she is so, so beautiful, okay? They want us to know that they know how beautiful this woman is. There is a lot of overtly masculine posturing, most of the men practically bursting out of their too-tight suits designed to showcase their impeccable physiques. The men also immediately begin forming cliques while trying to establish their dominance over each other. It's kind of adorable how they are not only trying to win Rachel's affections, but to impress each other with bravado bluster.

As the men mark their territory with droplets of sweat laced with liquor and Axe body spray, Rachel tries to get to know them better. There is infinitely more awkwardness. (Lest you think I am exaggerating, one of the men has a creepy doll dressed exactly like him that he totes around. It's the stuff of nightmares.) As the night goes on, everyone does their desperate best to get some quality time with Rachel. It begins to feel exhausting. And then Bryan, the Columbian chiropractor, takes the initiative and chew-slurp-kisses her, which is to say he starts kissing her loudly and wetly while looking like he's cannibalizing her face. Rachel gives Bryan the first impression rose and they cannibal kiss some more, so clearly this season is going to be a beautiful hot mess.

The bar for progress is generally really high—we measure it by the first black president, the first Latina to serve on the Supreme Court, the first black Librarian of Congress. But sometimes, progress is an incredibly beautiful, talented, and charming black woman voluntarily tolerating the attention of 31 unworthy men on national television so that she might find love or something like it.