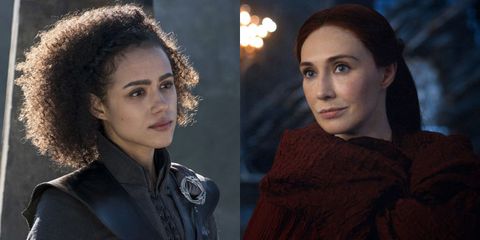 This week's Game of Thrones brought us the highly-anticipated meeting of Daenerys and Melisandre, but the most intriguing reveal in their conversation came courtesy of another amazing GOT lady: Dany's friend and translator, Missandei.

Melisandre has been clear in her objective for as long as she's been on the show: To serve the Lord of Light and find The Prince That Was Promised, believed to be the reincarnation of Azor Ahai, a legendary hero in Westeros' history. She used to believe Stannis Baratheon was the Prince, but in Season 6, she came to believe it was actually Jon Snow.

And that's what she came to talk to Dany about. "I believe you have a role to play," she tells the Mother of Dragons. "As does another."

Missandei, aka the Greatest Translator in All of Westeros, cuts in to correct Melisandre when she quotes the original prophecy—which she has been mistranslating this whole time. Because the word that Melisandre has been interpreting as "prince" has no gender in the original language, the prophecy actually refers to the Prince or Princess That Was Promised.

Since fans have theorized for years that Jon was actually The Prince That Was Promised, this is huge. The prophecy could now refer to Dany or, as some fans believe, to both Jon and Dany.

The prophecy in question states that, "When the red star bleeds and the darkness gathers, Azor Ahai shall be born again amidst smoke and salt to wake dragons out of stone."

Even though Jon is technically a Targaryen, Daenerys has already woken dragons out of stone—just saying.