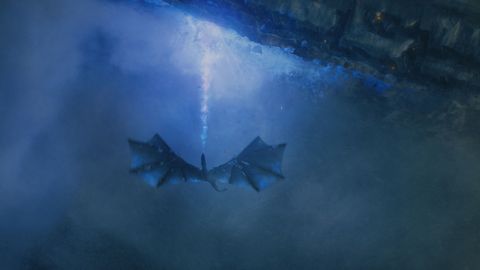 Viserion the Dragon was casually made into a zombie (AKA a Wight) thanks to the Night King being truly evil, and his arrival on Game of Thrones is obviously a game-changer. But not just because Viserion can wreak havoc at the behest of the show's greatest antagonist. Turns out he could do even more damage if we take this GOT fan theory into account—which speculates that the Night King will use his new dragon buddy to turn everyone into the walking dead.

"The Night King now has a dragon (thanks, Dany!). So far most discussion I've seen has focused on the dragon's power, as we saw when it breached the Wall this week. But the dragon has a far greater power in the Night King's hands—its mobility. The Night King can now fly anywhere in Westeros relatively quickly. And he can raise the dead. Not only is this a place where people don't burn the dead, but due to the recent wars ravaging Westeros there are plenty of corpses lying about or in mass graves. At the moment the heroes think the battle will be fought in the North on a front defined by the advance of the army of the dead. But they're about to be proven horribly wrong. If the Night King takes off on a grand tour, the entire continent will be facing a zombie apocalypse overnight."

TL;DR: The Night King can raise the dead, and he now has the mobility, the speed, and a dragon to do so. And, lest you forget, there are tons of dead bodies currently lying around Westeros—all the Night King has to do is fly over, raise 'em up, and create a country-wide army of undead soldiers. So, to everyone who thinks they can peace out to an island, or chill in King's Landing and let the North fight this one: Have fun with that.

As the original poster says, we're looking at an overnight zombie apocalypse in Westeros.