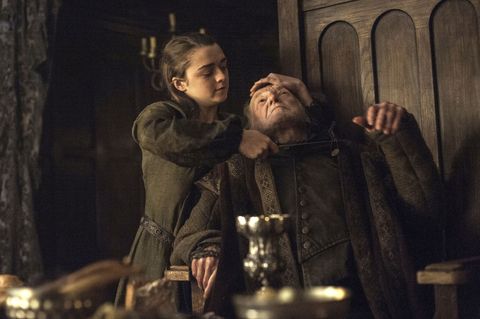 You know how everyone dies on Game of Thrones? Yeah, it's kind of a thing—but while some of the deaths might seem random (what did poor Dickon do to deserve that, HBO producers?), the way in which they go down certainly isn't. In fact, the GOT Powers That Be seem to plan deaths in a straight-up genius way—and a Reddit user discovered a pattern which all comes back to the characters' most "infamous moments."

Turns out the following people were killed in the same (or at the very least similar) fashion as their most iconic moments on the show. For example, Ned used his sword to behead a Night's Watchmen, and ended up being beheaded. Roose Bolton killed Robb Stark with a knife to the heart, and was killed in the exact same way. Walder Frey had Catelyn's throat cut, and got his slashed in return by Arya.

But amazingly, even more examples came from the comments section on this thread: Ygritte used arrows to kill people, and was killed with one. And most epically: Tywin made Tyrion in charge of the sewers in Casterly Rock, and was killed while using the bathroom.

To quote Kanye West: bow in the presence of greatness. Greatness, in this instance, being Reddit.