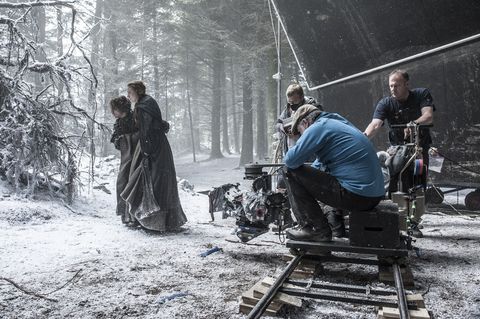 Game of Thrones is currently on hiatus, and frankly, no—we are not okay. But the good news is that the cast and crew are slowly but surely revealing small details about the upcoming eighth and final season, and MarieClaire.com spoke to the show's Director of Cinematography/Photography David Franco about what we can expect. Keep reading for details about next season, the validity of all those viral fan theories, and his collaboration with LG (turns out they use smartphones while scouting GOT—who knew?).

'Game of Thrones' is scouting in Belfast—and a new location could be added to the intro map:

"Belfast is where our production center and studio is, so we are principally there. We always go to a stunning seaside Northern Ireland landscape around Belfast as well. For the map, I'm not in the know yet—and it is really early in the production schedule. A decision like that could be made in the final minutes."

"Most of [this scene was] created in post-production, so DPs are not really involved. As far as I know, it is a fan's vivid imagination, but you never know!"

Tons of effects are actually done in the moment—like dragon fire, or the occasional snow storm:

"It is always fun to recreate the elements, like a snowstorm for example, where we use a snow and wind machine to replicate nature. For the dragon—even if we add the animation of the animal after—the flames are actually real and created on set around the stunt people and actors."

Jon and Dany's sex scene had to adhere to a certain set of rules:

"I was not involved in that [particular] shooting for Season 7, but as Director of Photography/Cinematographer, we have a mandate to be consistent with the 'look' of the show. For the John and Danny scene on the boat, the reason it feels so intimate is that many close-ups were used versus wide-establishing shots, and those close-up formats showed two great actors who conveyed that intimacy."

The Battle on the Wall was the hardest scene to shoot:

"The hardest scenes are always the battle and action scenes, which require minutia planning on every level to achieve the most dramatic effects—yet still having a safe set. For example, for the 'Battle on the Wall' in Season 4, we created a 360-degree shoot with continuous action and sword fighting."

He kinda-sorta-maybe knows how 'GOT' ends:

"We do read the script, and are planning the shooting of the scene—so we are supposed to know the end. But a new script can always appear just as we about to start shooting and reverse the situation! Plus, shooting multiple endings is sometimes done to keep everyone in the dark, including the actors."

All those Easter eggs you're obsessed with are completely planned:

"We are sometimes involved in those Easter eggs, because they need to be filmed and planned like any other scene."

"When I'm location scouting, smartphone tech certainly comes into play. I rarely nowadays carry a DSLR, so I use my smartphone to take pictures and videos for quick documentation. The phone helps me with numerous applications that help me take proper measurement of the exact positioning of the sun, tides, etc. That's why I partnered with LG to launch the new V30 smartphone, which was designed specifically for cinematic videography. As a DP and storyteller, I know the importance of video quality, so having a phone that produces rich, high-quality videos conveniently is great." 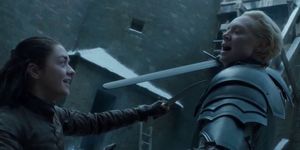