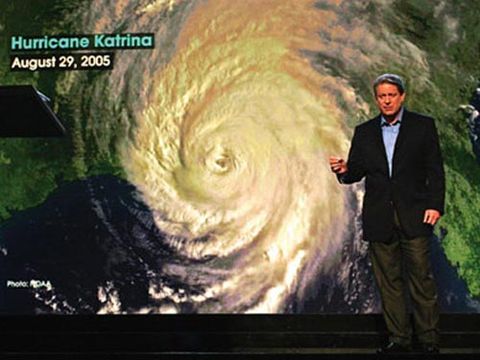 Notable quote: "I told my son, 'this is your country, and its up to those of us who have something to give to give it"

In a country where 50 percent of citizens are illiterate and more than two thirds are unemployed, an international film festival is the last thing on anyone's list of priorities. But what if movies could educate and distract a devastated population from their everyday struggles? Enter Paula Hyppolite, a petite, dreadlocked, 46-year-old Haitian and former New York City cabdriver, who returned to her homeland to help launch a festival that shows more than 90 films from 29 countries. The movies are free to the public for one week every year.

Q: Why a film festival?

A: In America, you don't worry about how to relax. You have access to so much — you can rent a DVD and entertain yourself. In Haiti, there is no such thing. There are no theaters in Jakmèl. The library is so poorly furnished you wonder if it's really a library. Access to any information is limited. The festival offers a worldwide trip in eight days.

Q: For the festival, you translated 15 films into Haitian Creole and directed a team of 50 dubbers. What's it like translating a story?

A: I have to get to know the characters really well so that I can express their feelings in Creole. Creole doesn't have a lot of the technical words that are common to other languages, especially English, so I was really trying to capture the feeling of the conversations.

Q: You showed Al Gore's An Inconvenient Truth. Despite the other urgent issues facing Haitians, the crowd was clearly outraged over global warming. What other topics touched people?

A: The most moving film for me was The Day I Will Never Forget. It dealt with female circumcision in Kenya. As usual, we screened the movie to be dubbed before recording the Creole voices, and some of the dubbers had tears in their eyes, finding it hard to believe that such practices still exist.

Q: You don't have a typical movie-mogul background . . .

A: I was born in Cap-Haïtien, moved to Port-au-Prince when I was 6, went to New York City when I was 15. I've worked since I was 16 — as everything from a hairstylist to a secretary. There came a time when I needed to divorce my husband, and I had to earn some megamoney to go through with it. I decided to get my hack license. I ended up renting the taxi during the week, working rush hour, and the other times I made jewelry. It was a great time in my life. Then, after three-and-a-half years, I thought, OK, what else is there? And that's how I moved back to Haiti.

A: During the time I spent in the U.S., I kept wondering, What can I do to give back to Haiti, to these people I am part of? I realized that the more I stayed away, the less I could do for them.

Q: What was it like to return to Haiti?

A: It's funny. You could say that I was successful in the U.S., yet here I am, living on top of a mountain, no running water, no electricity. And I feel good!

This content is created and maintained by a third party, and imported onto this page to help users provide their email addresses. You may be able to find more information about this and similar content at piano.io
Advertisement - Continue Reading Below
More From Culture
How to Join Marie Claire's Online Book Club
Read 'Plain Bad Heroines' With Us in November
Advertisement - Continue Reading Below
'The Undoing' Is Based on a Beloved Book
Who Is Hugh Grant's Wife?
Queen of the Screen
The 12 Sexiest LGBTQ+ Movies Around
53 Wild and Completely Iconic Vintage Porn Films
Dale Moss Is a Super Important 'Bachelorette' Star
It's Been a Weird Year for 'The Bachelorette'
Political Books to Read Ahead of Election Day