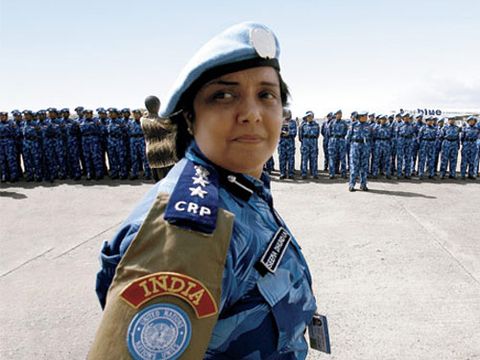 Seema Dhundia is used to being out in front: She was commander of the world's first all-female paramilitary in India; now she's heading up the first all-female U.N. peacekeeping force in Liberia. The country, devastated by a 14-year civil war in which more than 200,000 people died, suffered another setback when male peacekeepers were accused of raping local women. Enter Ellen Johnson-Sirleaf, Africa's first female president, who, upon taking office last year, decided to put women in charge of the country's security. Dhundia tells MC how it's going so far.

Q: Are women peacekeepers the solution for Liberia?

A: We are caring, and we know how to behave. My girls are true soldiers. I believe we will see fewer cases of abuse since we understand the issues affecting women and children -- two-thirds of my peacekeepers are mothers. Also, women generate confidence among the local population better than men.

Q: Did the locals resist you at first?

A: Liberians are very vibrant. When they saw my girls on the streets, they seemed happy -- men as well as women. I think we've inspired the local women, too; now they are joining the national police force.

Q: What's been your toughest day on the job?

A: When I was in central India, I witnessed mob violence for the first time -- a huge group of people throwing glass bottles. The situation was getting out of hand, and we were ordered to fire on the crowd. At moments like that, there is no place for fear. We fired -- into the air, though -- and subdued the crowd with tear gas. Fortunately, there were no casualties.

Q: Does your family support your choice of profession?

A: My husband and I met in the police academy and underwent basic training together. We're not always posted to the same region. Right now, my husband is commanding a unit in New Delhi. He is an officer in the National Security Guards, an elite unit that protects VIPs. I commanded an all-male platoon in New Delhi before Liberia. My son and daughter are with him until I return.

Q: Why this line of work?

A: My father was a civilian officer in the Army Service Corps. My brother is a navy pilot. When I was a kid, I got such a kick out of the uniforms, I wanted one, too. When I was 20, I got the chance. The Indian government announced that it wanted women represented in all areas of society, so it formed the women's armed force. I took the exams and qualified. I did a year of extensive training, learning drills, and weapons handling. Then I joined India's first female battalion. In January 2006, when I was chosen to lead a force of hundreds of women in Liberia, it was an unusual posting. I thought, Now I am going to prove myself.

Q: What advice do you give your soldiers?

A: I tell them to remember their training, follow the rules, and do not be intimidated by men.

This content is created and maintained by a third party, and imported onto this page to help users provide their email addresses. You may be able to find more information about this and similar content at piano.io
Advertisement - Continue Reading Below
More From Culture
'The Great British Baking Show': Who Is Peter?
The Most Romantic Movies of the Year
Advertisement - Continue Reading Below
It's Time To Binge Hulu's Best Documentaries
When Will 'The Crown' Season 5 Be on Netflix?
'The Undoing' Season 2: Everything We Know
Cute Gift Ideas for Every Woman in Your Life
'The Undoing' Differs Sharply From the Book
'The Undoing' Is Packed With Stars
Differences Between 'The Undoing' Book and Novel
It's Been a Weird Year for 'The Bachelorette'