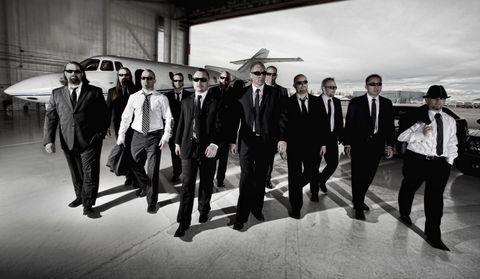 The Café de Paris in Tokyo is bustling with chic young women sipping coffee and reveling in the restaurant's air of faux-French refinement. Shoko Tendo calmly puffs on a cigarette beneath the twinkling chandeliers. She knows she could shatter the decorum by merely rolling up her sleeves. Her arms — and almost every other inch of her birdlike body—are plastered with the trademark tattoos of a Japanese gangster.

Instead, she's careful not to reveal that she comes from the yakuza, Japan's much-feared world of organized crime. Despite the cloying late-summer heat, she's clothed practically head to toe, in a long-sleeve lilac shirt layered over a white tee and skinny jeans. She's a different kind of rebel these days. Leaving behind her gangster loyalties, she has become a talk-show celebrity in Japan—the first female ever to break the code of silence and speak about life for women in the underworld.

In a knee-jerk way, I expect the russet-haired Tendo, whose father was a high-ranking mob boss, to be intimidating, or at least loud and brash, but she speaks to me with a quiet thoughtfulness in her native Japanese. Her best-selling memoir, Yakuza Moon, shocked this conservative nation three years ago with its graphic accounts of her addictions to sex, drugs, and violent lovers. With the book's recent publication in the U.S., she has agreed to do her first-ever interview with a foreign magazine to discuss the impact of her decision to speak out—and about her life now as a single mother.

She's more relaxed in person, with an iced coffee in hand, than she appears in her book, so I jump right in and ask why she's still alive after writing it. Usually, any kind of betrayal in the mob world is an automatic death sentence. And the yakuza are an especially macho bunch, known for rituals that signify their fanatic allegiance, such as severing their little fingers to atone for mistakes. "I was really nervous about that," Tendo says. "But I think I've gotten away with it so far partly because I focused only on my own experience and didn't incriminate anyone else." Yes, she gets threatening phone calls, but Tendo, 39, insists she has no regrets. "I needed to do this for myself to find out where I belong in the world," she says, explaining that yakuza women, while rarely involved in criminal activities themselves, are vilified by association. "People in Japan can smell it if you come from a background like mine—you can't hide it. I wanted to change my life, but I realized the only way I could do that was by first being honest about who I was."

Lowering her voice so a man with a glistening comb-over can't hear, Tendo tells me how her early life was dominated by her volatile father. He was the head of a gang allied with the largest yakuza syndicate, the Yamaguchi-gumi. She remembers discovering what a "big boss" he was: When she was 6, she opened the door to find a gangster dripping blood. He was clutching a box for her dad, which contained the finger he'd just hacked off his own hand. "The man was my dad's underling who'd done something wrong," she says. "Dad started hitting him. I couldn't believe my father was still angry with him, even though he'd cut off his finger to say sorry." Tendo hid behind her mom, but she'd seen enough to know that her dad, Yasuhiro Tendo, wielded a terrifying power.

Tendo has a personal style that's impossible to pin down. She doesn't stand out awkwardly, but she doesn't come close to the impeccable sartorial coordination of the Tokyoites around us. She wears a diamond-encrusted Hermès watch but carries a big, battered canvas satchel. Her hair is sharply cut, and her makeup is expertly applied, yet she hides it all under a baseball cap. "My appearance is like me: mixed up," she says. "I don't want to be part of the yakuza world anymore, but I'm not ready to join mainstream society. I still find it hard to trust people on either side."

Tendo was raised in a clandestine realm of violence and ill-begotten wealth. Descended from medieval gamblers and street peddlers, the yakuza came into full force during the U.S. occupation in postwar Japan, when demand for black-market goods escalated. For years they ran rackets in corporate extortion, real estate, and loan-sharking. In recent times, authorities have been cracking down, forcing the gangs to find sources of overseas income, such as sex-trafficking and weapons.

Given that Japan is generally one of the world's most law-abiding nations, the yakuza are especially sinister figures in the national psyche. For Tendo, laying bare her "sordid past" is her way of trying to reconcile her conflicting feelings about who she is. "I hate yakuza. I've seen all the ugly things they do," she says. "But I loved my dad, whatever his crimes. He raised me, and I have his yakuza blood."

Shoko Tendo's defiant tattoos stretch from her neck to her ankles.
Jeremy Sutton-Hibbert

Her teen years were equally tough, she says, with what seems to be a genuine lack of self-pity. Bullied for being a "yakuza kid," she dropped out of school to join a gang. "Society didn't accept us anyway, so what did we have to lose?" she says. "That's how I felt." Her world fell apart completely at age 16, when her dad's construction and real-estate business collapsed, leaving him in astronomical debt. Gangland creditors seized the house and threw the family onto the streets.

As Tendo sips her coffee, I'm surprised that no one recognizes her, but she has a way of hunching quietly in her chair that renders her inconspicuous. With a sigh, she continues her story, explaining that once she was no longer protected by her father's power, she fell prey to a string of yakuza lowlifes attracted to her young body. She spent years holed up in "love hotels"—seedy, neon-lit places where rooms are rented by the hour—waiting for lovers to deliver her fixes. "When I wasn't having sex or doing drugs with those men, I'd be listening to them boast about who they hurt that day," she says, adding that they were violent toward her, too. "They always used the excuse that they thought I was cheating on them to beat me up." At one point, her face was so badly damaged that she required surgery. Today, her face is so flawless, it's almost too perfect.

Tendo is not an easy woman to size up. Especially, I realize, when she starts talking about her decision, in her early 20s, to get a yakuza irezumi, or full-body tattoo. "It was after one particularly bad beating that I knew I had to do something drastic," she says. "So I came off drugs, resolved never to go out with yakuza men again, and went to the tattoo parlor." In yakuza tradition, tattoos symbolize membership to a clan, and also, as they take more than 100 hours to complete, the ability to withstand pain. Since Tendo couldn't escape her origins merely by running away, she decided to make the boldest statement she could about who she was. She saw it as empowering, a way to "acknowledge my DNA, to give the finger to yakuza men, and to take control of my life."

The suburb of Sugamo, in northern Tokyo, doesn't boast anything like a Café de Paris, but it does have a pachinko parlor called Club New York. Pachinko is a kind of Japanese pinball and a major national addiction. Tendo worked 16-hour days at the club amid the kaleidoscopic clamor in her mid-20s, when she was trying to become independent. She shows me the place with a cursory wave as we come out of the subway station, but it's not why she has come here. She visits Sugamo every month for a different reason: Her mother and father are buried in a nearby cemetery.

It's drizzling as we walk through Sugamo's twisting backstreets to the cemetery, which is crammed between a jumble of low-rise homes. Wearing her baseball cap pulled low over her brow, Tendo lights some incense and prays at the cemetery's Buddhist shrine. Her father died in 1997; he never recovered from his spectacular business crash, or from the loss of his wife, who had passed away six years earlier.

Today, Tendo is a parent herself—her 22-month-old daughter, Komachi, is the result of a fling she had with a photographer after years of celibacy following her vow never to be with yakuza men. She chose to go ahead with the pregnancy alone, even though she knew that single mothers are another group of social outcasts in Japan. Does she like being controversial? "Actually, I'm writing my next book about being a single mother," she says, as we dodge the rain on the way back to the subway station. "I'm not trying to shock people. It's just that I think I'm much more broad-minded than most Japanese people, and that's probably one of the few positive effects of my yakuza upbringing." She hopes the book will show that single moms can be just as devoted to their kids as anyone else, noting, "Being Komachi's mom is definitely the best thing I've ever done."

"I'm not trying to shock people. It's just that I think I'm much more broad-minded than most Japanese people."

Straphanging on a busy train on the way back to town, Tendo awkwardly hooks two fingers over her shirt cuff to stop it from slipping down her tattooed arm. "I don't even realize I'm doing it now," she says. When we get a seat, I ask her what she thinks the future holds. "I'm not sure. I haven't gotten everything together yet," she replies. "I'm still riddled with issues about my upbringing." Although she'd like to meet a "kind, decent" man to share her life with, taking care of her daughter is her biggest priority.

Given Tendo's own experiences, how will she protect her child if the little girl suffers any bullying because of her mom's background? "If anyone is cruel to my kid," she says with a sudden flash of ferocity, "I'll beat the living daylights out of them." Then, softening again, she adds that she'll never let it get to that stage. "I'm always going to be there for her, before anything bad happens."