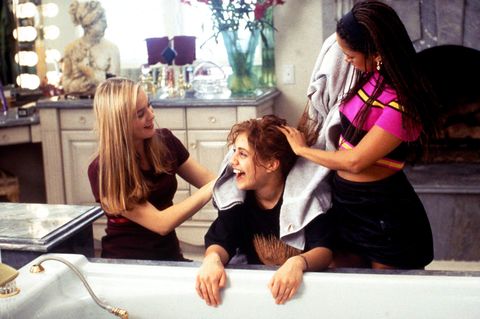 Some things can make any movie, however bad or Michael Bay-ish, better. A dance number. A wicked soundtrack. Meryl Streep! But throw in a makeover scene, and we'll at least give you a 60 percent on Rotten Tomatoes, even if it's a buddy comedy with Jeremy Renner, featuring Smash Mouth. Fine, an upper 50. Yet however enjoyable it might be to watch a diamond in the rough get shined up real pretty, it's hard to not be a little like, "Hmm, this changing-yourself-to-appeal-to-someone-else thing doesn't feel right, my dude."

Satisfying! But Paolo is so mean! And why can't a princess have Gucci hair anyway? To further investigate the Glow-Up Paradox, first, some thoughts.

It's an issue of identity and authenticity that can't be resolved in 90 minutes, but it can be bypassed for the sake of the woke viewer who also just wants to bob her head along and see some skirts being tossed around in peace. Maybe the makeover montage is best, then, when the middle bit with the whys and hows is omitted, like in the 1995 remake of Sabrina. Cut to Julia Ormond emerging fully formed, like a Parisienne butterfly. It's not character development, exactly, but at least it won't make you madder.

Chelsea Peng I'm Chelsea Peng, the assistant editor at MarieClaire.com.
This content is created and maintained by a third party, and imported onto this page to help users provide their email addresses. You may be able to find more information about this and similar content at piano.io
Advertisement - Continue Reading Below
More From Fashion
Back to Basics: How To Build a Minimalist Wardrobe
Michelle Obama Stuns at Biden-Harris Inauguration
Advertisement - Continue Reading Below
Jaclyn Rothenberg Pursues Pantsuits In Every Color
What to Buy From Madewell's Secret Stock Sale
What Biden's Family Wore on Inauguration Night
Your Girlfriend Will Approve of These Chic Gifts
The Softest, Coziest, Warmest Socks You Can Buy
Why Everyone Wore Monochrome to the Inauguration
See Kamala Harris's Sequin Inaugural Concert Look
Jill Biden Looks Chic at Inauguration Concert