According to Playboy, young people aren't into boobs anymore, adding mammaries to a CVS-receipt's length list of things beginning with Big Macs and ending with self-pity. But fashion people—despite their traditional aversion to any protrusion that interferes with The Line—would beg to differ. 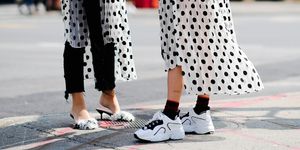 5 Microtrends from NYFW That Will Only Get Bigger

You see, for spring, designers have been presenting pieces that both enhance the poitrine while simultaneously ignoring it, namely by doing these stylized corsets where the traditional boob cups are present but not outlining where the real boobs actually are. Huh? Maybe a picture would help.

Granted, who knows how these J.W. Anderson tops would look on a larger bust measurement, but we can at least appreciate how they hint at the body without giving much away. Now, for an even more ambiguous extreme example, let's take a look at Prabal Gurung, who showed open jackets detailed with parabolas that only obliquely suggest the shape of the boobs underneath.

Then on to Instagram-famous brand Orseund Iris, known for similarly quadratic-formula-shaped enhancements, though raised and nubby and equipped with a heavy-duty underwire.

So what does it all mean, besides that designers have found a workaround for those boob cups, which someone (the Proenza Schouler boys, possibly) once called the hardest things to fit? Maybe that after seasons of high-neck dresses, we're ready to "rediscover" boobs, whether we like ours or not. (Think about it: With two machine-symmetrical outlines placed smack-dab in the middle of your chest, who wouldn't have a great rack, with the nipple falling exactly midway between elbow and shoulder?) Maybe that we shouldn't declare anything dead based on some dudes' porn searches. Or maybe that we were never really over boobs after all.

This content is created and maintained by a third party, and imported onto this page to help users provide their email addresses. You may be able to find more information about this and similar content at piano.io
Advertisement - Continue Reading Below
More From Fashion
Meet the Shoes You'll Live In This Summer
The Clogs We're Obsessed With
Advertisement - Continue Reading Below
Fashion-Forward Cable Knit Sweaters
The Leggings You'll Wear Around the Clock
Crossbody Bags You Can Wear With Everything
Our Fave Pearlescent Accessories
Your Search for a Good Pair of Linen Pants Is Over
Rainy Day Outfits to Make You Excited for Storms
Our Favorite Sunglasses for Summer 2021
Beach Outfit Ideas to Steal for Your Vacation