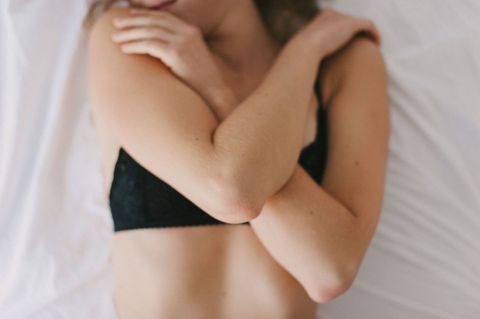 If you want to know what Fashion Boobs look like, Gucci showed a succession of gossamer dresses for Spring 2016 that bared, like all sheer tops on all runways, the models' breasts underneath.

Fashion Boobs are convex, the outer curve tracing the edge of a circle shallowly. They fall inward but not so far that you lose that flat expanse of sternum between. They're compact and buoyant enough to rest gently above the elastic band of a tulle trompe l'oeil bra the size and density of a cocktail napkin.

I don't have Fashion Boobs. Not even close.

Amongst my failings as a fashion editor, this one bothers me the least—what am I supposed to do about it? (More cardio? Less soy? TELL ME.) But it's more than a minor problem some mornings when my sports bra shows under a tissue turtleneck or when I'm trying to fit into a top by a designer who cuts for a smaller chest. It's just that everything would be a little easier if I weren't officially a 30DDD.

There's a sort of sartorial IDGAF-ery you can get away with when you have Fashion Boobs: very high or very low necklines, all-over volume, stuff that would be too in-your-face sexy on anything other than a two-dimensional-ish front. It's a fact that clothes hang and drape better when there aren't any major protrusions to contend with.

So that's why I fake it with power mesh and Lycra and, once, duct tape à la Kim Kardashian—only once not because it hurt but because it's just too lumpy and crunches when you give hugs.

My DDD diagnosis, courtesy of the expert bra fitters at lingerie brand Chantelle, is pretty recent—up until last month, I'd apparently been wearing (as we all apparently are) the wrong bra size. So they gave me my marching orders: Go down a band size and up, like, nine cup sizes. (Fine, two.) Coming out from behind the screen with this new piece of information, I felt a) semi-okay with it because sizing is just an arbitrary combination of numbers and letters that only represent one version of reality, but b) also kind of horrified because A DDD-CUP—that's Dolly Parton territory right there.

I felt semi-okay with it because sizing is just an arbitrary combination of numbers and letters that only represent one version of reality.

I spent the rest of the day half-incredulously, half-challengingly sharing the news with anybody who'd passed the casual acquaintance mark, like "Can you believe MY BOOBS? THEY'RE FREAKISH, I TELL YOU." The people I work with, the ones who understand, politely said "you hide it well," which goes to show that no one notices anything, nor do they care.

Regretfully, a revelation of cartoonish proportions and a new, fuller-coverage bra (they're not lying when they say the right size makes all the difference) weren't enough to persuade me to give up my boob-camouflaging ways. But it did make me think about the paradox of acceptance and improvement we face as women. Do I have to love my body exactly as it is? Is it so wrong if I try to reshape it to be how *I* want it? That's where my DDD-disguising comes from—not from shame or embarrassment but from the place where my ideal self lives.

Still, maybe one day my "problematic" boobs won't have to be pressed flat against the bodice of a dress that fits everywhere else. Maybe one day I'll find a dress in which my unbound boobs look satisfactory, even good. That's the hopeful, self-making beauty of fashion: Nothing is impossible.

Chelsea Peng I'm Chelsea Peng, the assistant editor at MarieClaire.com.
This content is created and maintained by a third party, and imported onto this page to help users provide their email addresses. You may be able to find more information about this and similar content at piano.io
Advertisement - Continue Reading Below
More From Fashion
Found: The Very Best Sunglasses Brands of 2021
Demi Moore Walks Fendi Runway in Paris
Advertisement - Continue Reading Below
PSA: Everlane Just Restocked Its Sale Section
Editor's Picks: Haute Couture Spring 2021
Did Someone Say Après?
The Margaux Shoes to Invest in Now
How A Designer's Ideals Made Her a Part of History
Editor's Pick: Our Favorite Cashmere Scarves
The Biggest Jewelry Trends for Spring 2021
Leather Skirts Are an Edgy Wardrobe Must-Have