Just after checking into a state-run psychiatric hospital, writer Daphne Merkin met the first of her fellow patients in the depression ward. It was a surprising encounter. The patient, who had just undergone electroconvulsive therapy, was shouting about the treatment in a shockingly aggressive manner. But Merkin wasn’t taken aback by the patient’s aggression so much as the patient’s gender: He was male.

Merkin, who struggles with depression, had been hospitalized a few times before, and—no matter where she was being treated—the depression unit tended to be overwhelmingly female. God, he’s so admirably energized, she thought of the enraged patient, while she herself was in the midst of deep, immobilizing depression. She found herself wondering if perhaps things had changed, if perhaps in the years that had passed since her last hospitalizations, a balance between the sexes with mental health issues had emerged.

Women are diagnosed with depression at nearly twice the rate of men.

But no. Men still made up less than 20 percent of her unit’s patients. “It felt a little like I was in a coven of women who had been cast aside, washed up on the shores of a psychiatric hospital,” says Merkin, whose memoir of depression, This Close to Happy, was published earlier this year.

Merkin’s observation is not solely anecdotal. According to a study released in May, women report feelings of and are diagnosed with depression at far higher rates than men, starting at an age far younger than previously thought. Dr. Rachel Salk, along with researchers from the University of Wisconsin-Madison, found that adolescent women receive depression diagnoses about three times as often as young men do. This gap narrows in the 20s and 30s, but women are labeled “clinically depressed” at nearly twice the rate of their male counterparts.

Why does this gender gap exist? “Self-blame is really endemic to Westernized women,” says Linda McMullen, a professor of psychology at the University of Saskatchewan in Canada, of the fact that Salk's research indicates that women in more gender-equitable societies (societies where women reached similar levels of education and were paid the same for the same work) reported and were diagnosed with depression more frequently, not less.

It all seems to be caught up in the complexities of being a modern woman in an allegedly equal culture—which, as we all know, isn't equal at all. McMullen notes that the depressed women she interviewed for the book she co-edited, Situating Sadness: Women and Depression in Social Context, said they felt like cultural norms implied that they should be a mothering caretaker to their partners. But they also felt they were sacrificing so much of themselves for very little: Their partners did not reciprocate, and their relationships often failed. They felt a deep discomfort putting themselves aside so completely for the sake of a romantic partner. 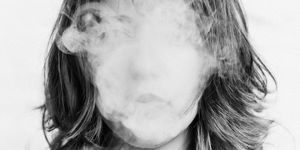 Social roles clearly play a part in the depression gender gap, but it’s important to remember that depression is also a biology-based illness, one that may be caused by a chemical imbalance. Researchers are still exploring the biological reasons for the disease, but currently they believe that the brain’s neuron connections, neuron growth, and nerve circuits’ ability to function all affect depression.

“Women just have more people they care about and care for—what looks like social support can be a social burden."

Medical interventions can be helpful, and all patients should listen to the advice of their doctors. But just as a woman’s perception can impact her diagnosis, so too might it impact her ability to heal. McMullen proposes a solution beyond the Rx pad: Remembering that, as a woman, you live in a society that is oftentimes sexist and unfair can help prevent you from feeling isolated, like there's something wrong with you and you alone. “Don’t blame yourself," she says. "Examine what’s going on in your life, but not only in your immediate life." One scroll through Twitter exposes just how messed up the world is for women right now. Yes, it's all rather depressing. But it's not you, it's them.

.
This content is created and maintained by a third party, and imported onto this page to help users provide their email addresses. You may be able to find more information about this and similar content at piano.io
Advertisement - Continue Reading Below
More From Health & Fitness
The Ultimate Smart Water Bottle Is On Sale
Bala's Ankle Weights Are Finally On Sale
Advertisement - Continue Reading Below
CeCe Telfer Has Already Made History
How to Help People in India amid COVID-19 Surge
I Have 'Triblings'—3 Babies Born 7 Weeks Apart
Tarana Burke to Assault Survivors: Hold On to Hope
Dear Survivor: You Are Enough by Merely Existing
Eco-Anxiety Is Manifesting More in New Moms
Exclusive: New Teleabortion Service Launches
Stress-Relieving Gifts That Will Put You at Ease