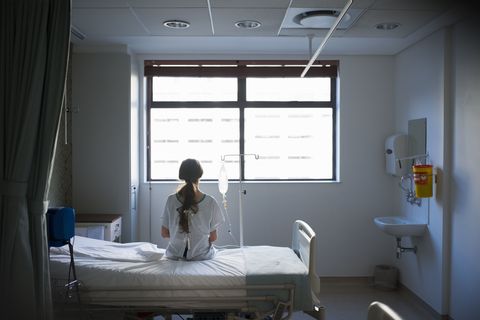 "Jesus, Jen, you look like hell," Manny told me. He was cooking that day at the restaurant where I worked in Chicago. "You're pale. You should sit down."

I couldn't focus on his face. My vision made me nauseous, alternating between blurry and tilted. I leaned against the wall.

"No, no… I'm fine. I just need…some bread…" My limp body slid down the wall. I woke up on the tile floor a minute later with the crew standing in a circle overhead, peering down at me with worry.

"I should probably go home," I said to nobody in particular as they helped me stand. Manny walked me out to his car and set me inside, then took me back to my Wicker Park apartment. I stumbled up the stairs to the top floor of the three-flat and sat down in my bedroom. And then, as I'd done every day, twice a day, for the past week and a half, I picked up a syringe and stuck it into a vial of clear liquid. I pinched a little bit of fat near my belly button. I closed my eyes, stuck the needle in, and pushed the liquid through—and instantly reeled from the searing pain at the injection site. It was like being burned from the inside out. I threw out the syringe and laid down for a nap.

I wasn't a junkie—I was an egg donor. And my life had turned upside down in a mere six months.

The Number 66 bus was my lifeline in the city, something I rode day in and day out to and from work. And one particular day, I looked up to see it wrapped in a brightly colored ad: "Women under 30, donate your eggs and make $5,000 within a few weeks!"

I was a recent graduate from a pricey art school, drowning in debt and hating my job. Not even five minutes passed before I was on the phone, dialing the number on the ad, calling my savior. Two days later I sat in the donation office taking personality tests, undergoing psychological screening, and giving the staff photos of me to add to the donor binder hopeful parents would browse through.

Within a week I had my first "client." The process was fantastic. Simple to do, no pain aside from the slight pinch of twice-daily shots for several weeks, no nausea, an outpatient harvesting, and quick payment. It was great—at very little inconvenience for me, I had done something wonderful for another person, and been paid handsomely for it.

It was only three weeks before another couple wanted to use my eggs. I jumped on that, too. I was in it now. I was addicted to giving people the eating, burping, pooping bundles of joy they so desperately wanted, for money.

The donation center suggested I wait at least another month to let my body get back into the swing of my normal cycle. But I had student loans piling up into the $100,000s, and I had consulted three separate doctors who told me waiting just a week was more than enough time between donations, so I shrugged it off and signed up.

I spent the next few weeks in my own personal hell, shoving needles into various parts of my body, injecting fluid that felt like pure grain alcohol in an open wound. The doctor I saw throughout the process told me I was likely allergic to the drug, but also said that because my reactions weren't serious, it didn't make sense to stop.

So I kept at it, even when I started fainting on a regular basis. It was like clockwork: an hour after each injection, I would get woozy and black out. Everything around me spun whenever I stood up. My hearing filtered in and out. I found out later that not only was I allergic, but that my body was responding to the drug in overdrive.

Every egg donation has a 10% risk of ovarian hyperstimulation syndrome, where the ovaries swell from over production of eggs. I didn't suffer the most adverse consequence of the syndrome—death—but my doctor did tell me he'd never seen so many eggs in one extraction. The combination of allergy and overworked ovaries held me captive in a painful, blurry state for the length of the donation process.

I muscled through it, telling myself that it was only a little longer and then it'd all be finished. The day I went in for my extraction, I could practically see the dark cloud of pain and illness lifting from my body.

To extract eggs, the doctor passes a hollow needle up into the ovaries and uses suction to basically vacuum the eggs out of the ovarian follicles. But this time, something went wrong. My doctor slipped. He snagged the wall of my ovary and left a cut that would become thick scar tissue.

Of course, I was too busy to notice, coming out of sedation and praising the nurse for magically knowing I liked Sprite and Animal Crackers.

And then there was yet another mistake. After several hours, I wasn't close to having recovered. I was still sitting in a hospital bed in a daze when they pushed me into a wheelchair and handed me off to my ride home. When two weeks went by and I still couldn't walk up the stairs unaided, I went to the hospital—and they told me there was a problem with the anesthesia. I must have had too much. But the effects would dissipate in their own time. With no other option, I went back to my routine of home, bus, train, work.

[pullquote align='C']The weird cramp blossomed into a fiery stab that spread through my abdomen and I collapsed from the pain.[/pullquote]

A month later I was back in the hospital, still no better, finally being told about the scarring on my ovary. I had noticed a strange, tight, tugging feeling in my abdomen not long after the donation, but cramping was a common side effect, so I tried to ignore it. I had gone to a festival and had to be carried out because my energy suddenly drained and I went pale and fell. Back at home, I had reached up to put a utensil on the baker's rack and that tugging feeling suddenly went *snap*. The weird cramp blossomed into a fiery stab that spread through my abdomen and I collapsed from the pain.

A four-hour wait, an internal ultrasound, and a CT scan later, I listened as an emergency-room doctor told me what had happened: I'd had a cyst that formed on top of the scar tissue from the cut, and I collapsed because it burst. I sat quietly as he told me my options: ignore it and expect more cysts, have surgery to remove the tissue (that would probably result in more scarring), or have surgery to remove the ovary altogether.

Either way, my ovary was damaged. Either way, it would be more difficult for me to have children in the long run. Either way, I was screwed.

Ultimately, I chose to ignore it. I still get cysts, oddly about the same time every year. None have been as bad as the first, but it's still a constant reminder of the supposed benevolence that took its toll on my life.

I haven't tried having children yet. I'm too scared. I've seen friends have miscarriages and watched them dissolve into hurt and depression afterwards. Could I willingly latch onto the idea of creating life when I know there's a higher possibility of disaster? I don't know that I can. I'm just not ready to go there yet—which for me is a big problem, because I don't know how much time is left for even the possibility of having children. I could already be past my window.

The stress of not knowing how easy it would be for me to bring a baby to term is like a constant pressure I can't escape from. But that's my burden to bear, and mine alone, as a result of my own decisions. I grapple with that every day.

I see so much positive coverage of egg donation in the media, or hear women scream joyously from rooftops about how simple the process is, and it makes me furious. Even Sofia Vergara and Nick Loeb's frozen embryo legal spectacle twists me down into a rage spiral. It's just not always that easy to go through. It's not always that easy to freeze eggs until you want them. Sometimes, things go wrong.

My only hope is that young women start to think twice about donating. Yes, it's good money and you could potentially make someone else happy—but at what cost to you?

This content is created and maintained by a third party, and imported onto this page to help users provide their email addresses. You may be able to find more information about this and similar content at piano.io
Advertisement - Continue Reading Below
More From Health & Fitness
The Ultimate Smart Water Bottle Is On Sale
Bala's Ankle Weights Are Finally On Sale
Advertisement - Continue Reading Below
CeCe Telfer Has Already Made History
How to Help People in India amid COVID-19 Surge
I Have 'Triblings'—3 Babies Born 7 Weeks Apart
Tarana Burke to Assault Survivors: Hold On to Hope
Dear Survivor: You Are Enough by Merely Existing
Eco-Anxiety Is Manifesting More in New Moms
Exclusive: New Teleabortion Service Launches
Stress-Relieving Gifts That Will Put You at Ease