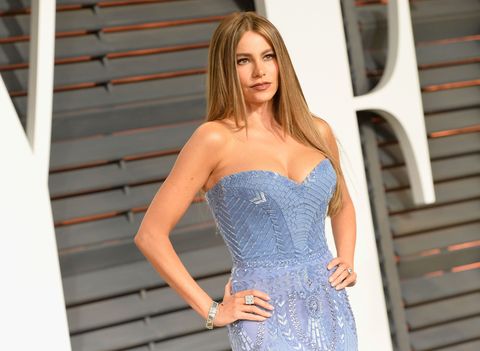 Update, 5/4: Since the news of the lawsuit broke, Sofia Vergara has kept quiet—until now. The actress talked about the legal battle with her ex-fiancé Nick Loeb on, of all places, The Howard Stern show. She emphasized that her lawyers are handling it, but that Loeb signed the contract twice and that it would be irresponsible to bring children into the world under the circumstances.

"A child needs a loving relationship of parents who get along. Who don't hate each other," Vergara said. "I wouldn't imagine [bringing kids into the world] who are already set up everything wrong for them. It would be so selfish."

Admitting that she hadn't read the op-ed, the actress didn't seem worried about the legal implications. "There is a contract, he can't do anything," she continued. "I didn't do anything wrong because somebody changes their mind suddenly."

As for what her new fiancé, Joe Manganiello, thinks about this, Vergara had this to say:

"We try not to even talk about it. We have lawyers. We're having so much fun right now. We're moving to a new house, he's promoting Magic Mike, I'm doing this new movie. We're planning our wedding. We try not to think about this. We cannot do anything."

And that's that. We'll just have to wait and see how the court handles this one.

Update, 4/30: In a New York Times op-ed, Vergara's former fiancé Nick Loeb defended his lawsuit, saying, "Many have asked me: Why not just move on and have a family of your own? I have every intention of doing so. But that doesn't mean I should let the two lives I have already created be destroyed or sit in a freezer until the end of time."

"In my view, keeping them frozen forever is tantamount to killing them," he explained.

As many commenters pointed out, just because something *can be* life, it doesn't necessarily make it so.

As one reader wrote, "One would think Mr. Loeb's experience with the first 2 embryos would have taught him that the two under discussion now are, at best, only potential lives—there is no guarantee that, even if implanted, they will become the children he clearly so desperately wants."

In any case, the case (and essay) have received a lot of attention, and rightfully so.

Update, 4/21: Nick Loeb is speaking out about the lawsuit and embryos, saying that he had to file the suit when Vergara woudn't respond to his private requests.

"I have always strongly believed that life begins at fertilization and that every embryo is a life on a journey towards birth," Loeb said, according to People. "I created these two female embryos with the purpose of taking them to term and not destruction, because I have always dreamed of being a father."

"I take the responsibility and obligation of being a parent very seriously," Loeb continued. "Creating an embryo in the natural way can lead to parenthood obligations, even where a man doesn't want to become a father. Where a man does want to become a father, and wants to impose no obligations on the other party, he should have that corresponding right. However life comes to be created, it should have no determination on either the rights of wanting to be or the requirements of having to be a parent."

Vergara has yet to comment, though her lawyer maintains that she never set out to destroy the embryos. In a statement to People, the lawyer stated: "She has always maintained that they be kept frozen, a fact of which Loeb and his counsel have always been aware, despite Loeb's statements to the contrary."

Original story, 4/16: Who has rights over an embryo? That's what's being decided in a crazy case between Sofia Vergara and her ex-fiancé Nick Loeb. In court documents filed in August but recently revealed, Loeb is reportedly suing Vergara in order to save the embryos they'd had frozen during their relationship.

According to In Touch, Loeb and Vergara created two frozen embryos with Loeb's sperm and Vergara's eggs. After the split and with Vergara's wedding on the horizon, Loeb wants to make sure that Vergara won't destroy them.

"We just wanted to plan ahead," Vergara told Good Morning America in 2013 when the embryos were made. "My boyfriend Nick—he's three years younger than me and he's never had a son, so I wanted to make sure I already froze some eggs. I wanted to take advantage of science. Why not?"

Allegedly, the documents between the couple only address what would happen to the embryos following death—not divorce or separation.

"You're talking about, essentially, an out-of-body baby, potentially," legal analyst Robin Sax told ET Online. "Where this case is going to rise and fall is in the documents from the IVF folks, because what happens is that there are all kinds of contracts that are supposed to address all these potential situations. [These particular documents] only address what would happen in death. They did not address what would happen in divorce or separation beforehand."

But according to Sax, Vergara might win out in this case should it be pursued further. "The court is likely to say no one can be forced to procreate if they didn't want to," Sax said. "If they can't come up with a unified decision, it is likely that that embryo will be destroyed."

Guess we'll have to wait and see what happens in this case—and in cases that follow.

The Freedom of Freezing Your Eggs

The Best Countries for Women Around the World

Samantha Leal Senior Web Editor I'm Sam, the senior editor at MarieClaire.com.
This content is created and maintained by a third party, and imported onto this page to help users provide their email addresses. You may be able to find more information about this and similar content at piano.io
Advertisement - Continue Reading Below
More From Celebrity
Hailey Wore a Nude Blazer and Micro Dress
Gabrielle's TikTok About Her Prom Date is So Funny
Advertisement - Continue Reading Below
Victoria Beckham Shuts Down 'Spice World 2' Rumors
Kendall Jenner Shared Her Experience of Anxiety
'The Voice' Star Blake Shelton Opens Up About Gwen
Sussexes Share New Birthday Photo of Archie
Charles Is Still Upset Over Harry's Oprah Tell-All
Meghan and Harry Share New Archie Photo
The Cambridges Share Their First Full YouTube Vid
Courteney Cox Said the 'Friends' Fountain Was Grim