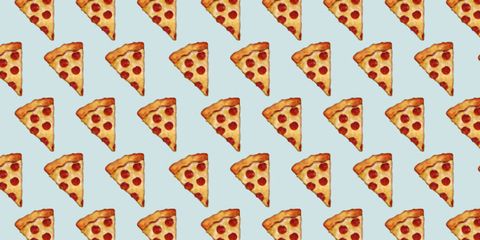 You know those people who take a paper towel and blot the tops of their pizza? (Side note: HOW DARE YOU.) Well, it seems that besides inducing blind rage from, well, me, they also might be on to something—*or* they could just be pawns in a scheme for buying more paper towels.

For the longest time, journalists/bloggers/anyone talking about blotting pizzas with paper towels or napkins were using a specific study that says blotting can eliminate 4.5 grams of fat and 41 calories per slice. Which, according to some lunatic math, saves you two pounds a year. (That is, if you're eating *87* slices per year.)

These figures, however, come from 15-year-old data by Georgia-Pacific Health Smart Institute. This institute is an initiative of Georgia-Pacific, which makes—wait for it—PAPER PRODUCTS. LIKE BRAWNY PAPER TOWELS.

According to Buzzfeed, who did the heavy lifting on this hellacious Pizza Scandal, the director of communications and public affairs at Georgia-Pacific said that they no longer had access to that data since the study was done so long ago and that they are "no longer able to verify the test results."

So—to dab or not to dab? In my humble opinion, just eat your damn pizza. It's all still terrible for you/great for you anyway.

Samantha Leal Senior Web Editor I'm Sam, the senior editor at MarieClaire.com.
Advertisement - Continue Reading Below
More From Health & Fitness
How to Have Healthy Convos Around Climate Change
How to Build a Mini Gym at Home
Advertisement - Continue Reading Below
Can't Find a Good Online Workout Class? We Gotchu
What It's Like to Be a Doctor Fighting Coronavirus
The Best Workout Apps for Women Who Want Results
LVMH Perfume Factories to Produce Hand Sanitizer
Why Social Distancing Is So Important Right Now
I Tested Positive For the Coronavirus
What Staying Awake for 36 Hours Does to Your Face
The Mental Health Apps Professionals Recommend