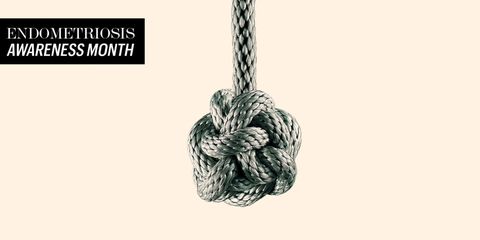 Endometriosis has been taking from me since I was a teenager.

At 18, I lost my job as a waitress due to my sluggish behavior, lateness, and excessive sick days. I rarely felt well, and often I was so miserably tired, achy, and spacey that I would settle in and wait for a flu that never came. Instead, I would start to feel better and have a good handful of days—maybe even a week—before it all came back.

At first, I had no idea what was wrong with me. Other girls get their period and *they* still work, I thought—even though my period meant pain so severe I threw up, sweated through my clothes, and spent hours in bed. Other people are tired, and *they* still go to work, I told myself—even though after nine hours of sleep, I fell asleep at the wheel waiting at a red light, waking to honking, a line of drool down my chin. I was in the prime of my youth, and my body felt like it was falling apart.

"I was in the prime of my youth, and my body felt like it was falling apart."

In lieu of a diagnosis, I assumed I was inherently feeble, incapable of dealing with a normal schedule like other people. My co-workers seemed to agree, and even friends who loved me clearly harbored a kind of pity for me, as if I were a kind, loving, and good friend, but obviously lazy.

This perception of myself continued throughout my adult life—and I believed it.

In my 20s, I taught preschool 32 hours a week and attended college at night school. Looking back, I'm unsure how I forced myself through the long days other than sheer willpower and desperation. I was chided by professors for falling asleep in class, but I was still able to get an A as long as I took only two classes at a time.

Work was a different problem. Although teaching preschool isn't  mental gymnastics, it does require high energy and focus, neither of which I came by naturally. My boss once pulled me aside and asked if I wanted to talk to her about anything. When I replied no, she told me that I seemed out of it and tired, and that I needed to get more sleep. I didn't even know how to begin to explain to her that I wasn't trying to make myself this way.

"white envelopes showed up in the mail. 'Your claim has been denied,' they each began."

When I married my husband, we were living within our means, working hard and raising our kids. I continued teaching preschool and my husband owned a small business. We had health insurance, so when the chronic pain and fatigue that had dominated my 20s became unbearable in my 30s, I thought I was covered.

Doctors began ordering tests to procure a diagnosis: blood draws, MRIs, a cat scan, ultrasounds, and finally a vaginal ultrasound that revealed a six centimeter cyst on my left ovary. I could tell by the muted expression on my gynecologist's face that he was worried. "We're going to schedule a surgery," he said. "And you'll need an MRI immediately to rule out ovarian cancer."

After the MRI, there was a waiting period to hear if this giant fruit hanging off the tree of my ovaries and fallopian tubes was rotten or not. Meanwhile, white envelopes showed up in the mail. Your claim has been denied, they each began. I was confounded. I didn't know it was within the insurance company's legal rights to deny payment for a doctor-ordered test. I had to ask each of my doctors to write to my insurance company, stating that the procedure was completely necessary and why. (Most of these claims were then paid after they intervened).

Then the news came back: I did not have ovarian cancer—I had stage-four endometriosis, a disease in which the lining of the uterus grows wherever it likes in a woman's abdomen, forming lesions that bleed, secrete hormones, and leave scar tissue that can cause horrendous pain.

There were two additional findings: one, I had lost half my left ovary. Two, I might not have any more children. The doctor had told my husband that if I wanted a baby, the only chance I'd have would be within six months post-surgery. I wept. We had deeply wanted another child.

As I recovered, the bills began coming in like a flurry of white slaps—envelope after envelope—all with the same words: claim denied. In the meantime, I returned to my gynecologist. "I have another cyst growing in the same place," I told him dully. "I can feel it filling; it's hot."

There's no way, he told me, and besides, I wouldn't feel it growing. He placed the ultrasound wand on my abdomen and pressed. I looked away from the screen. "Shit," my doctor said under his breath. "G*ddamnit, Maggie, I'm so sorry."

I had another six-centimeter cyst on the same ovary not more than five months after my first surgery.

It was at this point that I began to lose track of the insurance denials. I was working and mothering in a dense fog that made trying to focus on anything beyond my headlights impossible. Trying to plan out anything brought on anxiety and anger, the kind of anger that comes from being asked repeatedly to do something that you know you need to do, but something you just can't. The pain was daily—sometimes manageable, other times not. I was chronically exhausted and suffered with migraines, chest pains, severe muscular pain, IBS, and edema.

"After three years, with insurance, and paying co-pays the entire time, I ended up owing $70,000 in medical debt."

My doctors suggested another surgery, but I wanted to research my options first. I began with a simple Google search: endometriosis treatments. I spent the next year in a frenzy of note-taking, and emerged with a plan: I would see a specialist, and I would dramatically change my diet. My research had revealed that surgery was not enough to treat endometriosis; I had to eat anti-inflammatory, organic foods for hormone balance, something my doctors had never suggested to me. Meanwhile, I was still seeing a doctor every two weeks. At this point, the insurance was denying more claims than not.

My husband was a true partner. He took care of the kids and the house when I was too sick to do my part, and he never reacted to my illness with resentment. That is, until he saw our new grocery bill. Converting to an organic, whole-foods diet meant that those costs went up by 25 percent. And then, I began taking targeted supplements: more money.

That's when endometriosis started to truly compromise my marriage. Suddenly, we were fighting over the budget. My husband was scared; he needed to take care of me and our children, and our debt was growing. Not to mention that our sex life was in peril—the ballooning toxins in my body made it impossible for me to even want to have sex.

I kept going. I found an endometriosis specialist out of state. My husband and I flew out for my surgery, and then another follow-up surgery just a day later. After the second surgery, I could feel a radical difference. I felt new—and I still do.

But the total cost of endometriosis was astronomical. After three years, with insurance, and paying co-pays the entire time, I ended up owing $70,000 in medical debt.

And that doesn't even take into account the other, more human costs: all the times I wanted to play with my children but had to lie down with a heating pad on my abdomen and an ice pack on my head. The tremendous strain on my marriage. Additional potential children that we'll never have. Every professional opportunity that was jeopardized— and lost wages due to using up all my sick days on a recurring disease.

I did my part to heal, but I paid dearly.