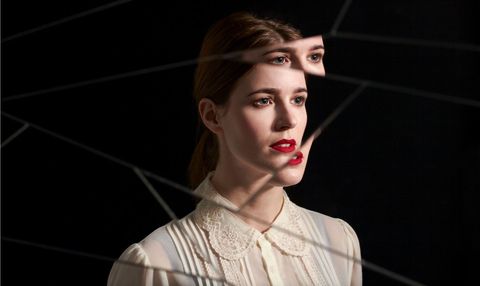 It was a sunny Friday morning in Los Angeles. I was up early running errands and had just pulled into my garage when I received her text:

"Julie - you have been my best friend for almost 20 years. Thank you for all of your kindness. I hope you have an AMAZING life filled with all the happiness, peace, and love that you deserve."

It was from my best friend, Barbra. And the text that followed stopped me right there: "I'm shooting myself today."

I called her instantly but the line just rang and rang. So I called her sister, who called Barbra's husband urging him to leave work and find her immediately. Frantic, I texted Barbra back and reminded her how many people in the world loved her. I told her help was on the way—but the help arrived too late.

Two hours later, a call from her sister confirmed the news: My vibrant, hilarious, loyal, beautiful best friend was gone.

"she was confused about the depth of her own feelings and didn't know how to talk about them. And I didn't know enough to ask."

Barbra and I met on the first day of sixth grade. We sat next to each other in homeroom and shared every class that day. I was a scrappy, gap-toothed 12-year-old who wore her brother's' old clothes; Barbra was a tall, smart, sassy girl whose wardrobe came exclusively from the coolest store in the mall: Contempo Casuals. I latched on immediately.

For the next 10 years, Barbs and I got into all sort of adventures. We volunteered one summer to build houses for Appalachia Service Project, hiked the Great Smoky Mountains of Tennessee, and drove the length of the Midwest to see concerts by Phish, Rusted Root, and Moe.

I fed off of Barbra's innate confidence and curiosity, always following her around like a puppy. Things came easily to her, people gravitated towards her, and she always seemed to be caught up in the center of some exciting scheme. I loved observing from the sidelines, with Barbra looking over her shoulder periodically to make sure I was okay and having fun.

But there was another side to Barbra that she didn't always let me see. At times, she was confused about the depth of her own feelings and didn't know how to talk about them. And I didn't know enough to ask.

The author (left) and her late friend, Barbra (right)
Courtesy of Julie Bensman

Here's the little I did know: She got depressed easily and took medication. I never saw her take it but she would attribute weight gain or moodiness to changing her meds. She could be manic, becoming intensely enthusiastic about her passions—like tattoos, skydiving, real estate, church–and then move on to something else the next month. She had an amazing singing voice and almost every time we saw a band play in a small venue, she became intent on somehow making her way on stage to sing a song (her favorite was Janis Joplin's "Me & Bobby McGee"). It could be embarrassing, but also endearing. I naïvely never considered a deeper connection between this behavior and the medication she routinely took to get through the day.

When Barbra was younger and her parents realized she needed some help, they consulted their HMO health insurance only to find a grim forecast. Each year, the health provider would add and drop mental health services with hardly any continuity of care—and with a high barrier for entry. Her mother told me it was an incredibly difficult and costly process: Barbra needed to see both a therapist for treatment and separate doctors for medication, not to mention her family was paying nearly $600/month out-of-pocket for prescriptions.

"I avoided directly engaging with her about her struggles because it was just easier to ignore something I didn't understand. "

"Medications were always a problem," her mother told me. "I think Barbra became too dependent on some and developed tolerance for others. Her diagnosis was never the same; it depended on the doctor and what she told him."

Even though Barbra didn't share details of her illness with me,  I always vaguely intuited something was going on. But I avoided directly engaging with her about her struggles because it was just easier to ignore something I didn't understand. I wanted to maintain the status quo of our light-hearted friendship.

When I moved from Chicago to New York in 2009, Barbs and I inevitably grew apart. I'd visit her family when I was home for holidays and she'd randomly call me to leave goofy voicemails in a Tom Jones-esque falsetto, but the truth was that we didn't know the intimate details of each other's lives anymore.

When she asked me to be a bridesmaid in her wedding last August, I was honored and endeared she kept the "you'll be in my wedding" promise we made in middle school. That was one of Barbra's most marked traits: fierce loyalty. Her wedding was full of old friends and thoughtful, loving family members, many of whom have become my family through the years. Barbra said it was the happiest day of her life.

That life has now ended. I still have her text from Friday, January 22 at 8:19 a.m. saved in my phone, a digital ghost I don't know what to do with.

Her family and I don't know what to do with her death, either.

"Barbra was tired of being sad," her mother says. "She was ashamed and embarrassed of her illness. As I re-read her texts and emails, I wish things had been done differently. I have discovered that mental illness is more common than I thought. We have no clue how to treat it. We have no clue what causes it. And no one wants to talk about it."

Every day, nearly 2,200 people in the world commit suicide. In 90 percent of suicides, mental illness is the attributing cause. Barbra was diagnosed with many things, the last of which was anxiety with PTSD, but no specific condition can be blamed for her suicide. In her death, there are no answers, just endless questions that all circle back to this: What else could we have done to help?

I try to imagine how Barbra was feeling in the final moments of her life and it makes me crumble to think how alone she felt. Sometimes I feel guilty for not engaging with her more directly about her mental health. I see now that by not asking, I wasn't acknowledging the most private part of her life—and I wasn't giving her the chance to share it with me.

If you or someone you know is struggling with suicidal thoughts, call the National Suicide Prevention Hotline at 1-800-273-TALK.