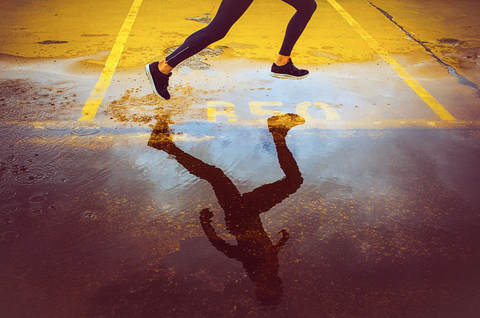 People say anyone can be a runner. These are the same people who get out of bed at 5 a.m. to knock off five miles before work. The same people who can breezily complete a 10K after a night of hitting the bottle at happy hour. Yeah, that's not me.

I've always wanted to be "a runner." Not only did I want the label and the bragging rights that come with the moniker, but also longed for the lithe limbs, the muscular thighs, and an excuse to buy a collection of Lululemon running gear. Genetics, however, betrayed me—I'm just over five feet tall, and am more accurately described as short and squatty rather than long and lean. The only time I'd ever actually run was to make the breakfast cut-off at McDonald's.

My un-athleticism and aversion to exercise eventually caught up with me. I grew up in a small town in the Ozarks, and my family considered bacon grease to be a food group. By the time college rolled around I'd packed on the Freshman 15 and then some. I met my boyfriend (now-husband) during my sophomore year, and by the time we'd cohabitated, I could barely pull my once-loose size 14 shorts over my dimpled thighs. But I was happy. I had graduated college with honors; I had a shiny new house, and a brand-new husband to match.

"I could barely pull my once-loose size 14 shorts over my dimpled thighs. But I was happy."

And then my world turned upside down. I got the call while I was at work, and I knew. Isn't that how all these stories start out—that you knew something was wrong when you got The Call?  My dad and I had been fighting, and I hadn't spoken to him in eight days. He was divorced, suffering from prescription pill and alcohol addiction, and living alone for that last decade. A neighbor called to tell me that she'd been knocking on his door for a week with no answer. I drove the mile to his small rental house to find a pile of rain-soaked newspaper on his doorstep. I screamed for what felt like hours, but I'm sure it was probably only minutes. And then the numbness set in.

During a time when I was supposed to be thinking about grad school and china patterns, I had to clean out my dead father's house, sell his used car, file life insurance policies, and plan a funeral. How does a 24-year-old coordinate music for a visitation and choose lining for a casket?

People say that time heals. You don't believe it, but you kindly nod your head. After a month of crying myself to sleep, hiding under my covers and waking up hoping that my once almost-perfect life was a dream, time had not healed me.

My debut consisted of a slow jog around the block and promptly resulted in vomiting on my neighbor's rose bush. Surprisingly, I pushed on. And as I pushed on, life pushed on. Running was my only reason for getting out of bed in the morning. I went straight from the covers to the road—a hot mess of unwashed, tangled hair, un-brushed teeth, and rumpled pajamas.

As I ran, I shed tears, and I unabashedly grieved for my father. I replayed that day, and the days that followed. I replayed our fight and the regret that lived in my heart. I cried in pain as my feet pounded the concrete. There were days when I wanted to turn to the anti-depressants that my doctor so willingly prescribed to me or the sleeping pills that are so readily available, but I laced up my sneakers each morning and running became my drug. Running became my counselor.

"How does a 24-year-old coordinate music for a visitation and choose lining for a casket?"

As the tears shed, so did the pounds. I didn't even realize that running was doing something for my body until I came face-to-face with denim. How many times had I cursed my jeans—blaming the dryer for having to up a size yet again? But for that last three months, I'd been slumming from bathroom to pajamas to leggings (on a good day), and when my trusty, comfy jeans slid down those once-chubby thighs, I realized that running might be saving more than my sanity.

I completed a 10K five months after my father passed away. Good memories began mingling with the sad during my runs—the constant film reel of finding him that day eventually stopped playing in my head. Each week, I'd have new thoughts; sometimes about work, often friends, my husband's support or weekend plans (I had weekend plans!), that were more positive and welcome. I even started getting dressed. Within a year, I finished an Olympic distance triathlon and have stayed steady at a size four.

I am now one of those annoying people who will say anyone can be a runner. I'm not fast nor lean, but I wake up at 5 a.m. to run five miles before work, and I have finished a 10K after a binge-y happy hour (thought it's not pretty).

I'm also one of those people who knows that time heals. But here's the thing: I won't tell you that because it doesn't help to hear it. You have to find it on your own, one step at a time.