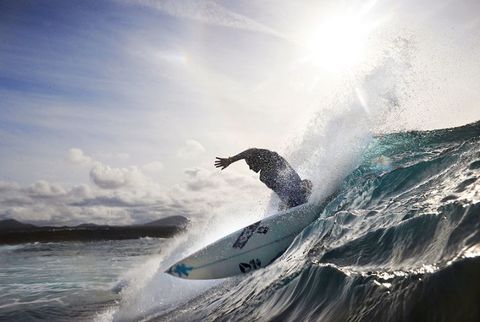 I've always been an extreme-sports person, the first of my friends to plunge into deep powder on a black-diamond ski run or finish a marathon. I love the adrenaline, the thrill of trying something new. Surfing, the ultimate rush-inducer, seemed like a natural next challenge. But I live in Manhattan, the land of lithe, spandex-clad Spinning addicts—no surf Bettys here. And though an oceanside surfing vacation sounds incredible, buying plane tickets plus paying for lessons and renting gear, all for a sport I had never tried, wasn't in my immediate budget.

So when I heard from a friend about SurfSet, a new indoor surfing class for landlubbing New Yorkers, I jumped at the chance to try it. That's how I found myself stomach-down on an apparatus called the RipSurfer X, a knee-high stationary plastic board atop three inflatable stability disks, similar to balloons. For a few minutes, as a warm-up, I "paddled" with my arms extended, pulling the contraption's Pilates Reformer—like resistance bands. On the wall opposite me, a video projector showed a giant wave looming.

"Let's catch it!" yelled Sarah Ponn, the platinum-blonde SurfSet fitness director, whose enviable physique is the class's best advertisement. Following her lead, I attempted the basic "pop-up" move: It's exactly what you've seen in any surf video, how a surfer gets up on her board. Was I a natural? Hardly. Shifting my weight from left to right, I wobbled like crazy. The disks rolled under the board, mimicking the feel of the open ocean. It wasn't pretty. Even though I stood for only a minute at a time, the balancing act had my core and quad muscles burning, while my arms smarted from the paddling. Several of my classmates tumbled to the floor. But I was doing it.

In the few months since its debut, the $35 class, which weaves in Pilates and yoga along with surf moves, has morphed from curiosity to bona fide craze. SurfSet's relaxed ambiance, in a temporary studio with 19 RipSurfer X machines spaced evenly across a hardwood floor; exposed brick walls; and Jack Johnson, Bob Marley, and Jimmy Buffett crooning in the background, doesn't hurt. The morning after my class, however, my arms were so sore that lathering my hair in the shower was painful. "Even if you have no interest in surfing, you'll get a full-body workout," says Ponn. "It's great for balance, core strength, and muscle building." An unexpected perk? Major cardio. In one 40-minute class, a 135-pound person burns anywhere from 400 to 700 calories. "Paddling can be more taxing than running," she says. "You get consistent resistance throughout your stroke."

SurfSet was born in February 2011, when Ponn, then a personal trainer at a Boston gym, spotted two guys working out with inflatable disks and bungee cords. One was a pro hockey player who surfed each summer instead of weight training; by the end of the off-season, he was leaner, stronger, and more agile than he would have been from gym sessions alone. Ponn's interest piqued, the trio teamed up to simulate surfing on land, experimenting with designs for the RipSurfer X, including water-filled bladders, which were sacrificed for the more authentic feel of semi-inflated balloons.

Now the team is opening a permanent flagship studio in New York, with another space in L.A. in the works. RipSurfer X classes are also cropping up across the country in gyms like the new Exhale in Atlantic City. As for me, virtual surfing whet my appetite for the real deal—I'm ready for my Kate Bosworth-Blue Crush moment and am dreaming of a surf safari vacation this winter. We'll see how much I really learned in class.