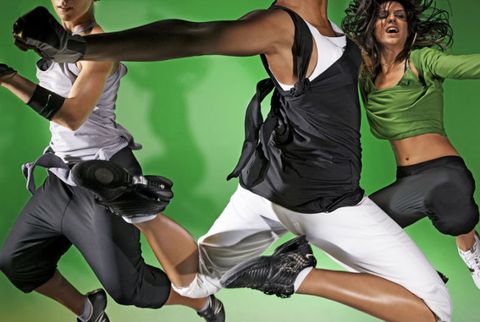 Janet Jackson would have us believe we are part of a rhythm nation, but I have my doubts, and they surface 12 minutes into the new 2Fly class at Crunch gym in New York City. Instructors Kristin Sudeikis and Rachel C. Warren—who created this '90s-inspired dance class that's rolling out to Crunch locations across the country—have just led our group through a warm-up and are now demonstrating the day's choreography routine. As far as I can tell, our bottom halves are supposed to be doing a hop-hop-sliiide, hop-hop-sliiide while we brush imaginary crumbs off our shoulders to the right-left-right-right, then the left-right-left-left. I am hopping and brushing, but the sequence is beyond me. So I take the advice Warren offered right after introducing herself with her "fly name," RaeC: "When in doubt, strike a pose."

2Fly may be a dance class, but a soundtrack that includes Kris Kross, TLC, and others from the New Jack Swing Era also makes it 45 minutes of '90s nostalgia. And there's no shortage of that lately, from the cropped sweaters and overalls in Phillip Lim's spring collection to this summer's Boyz II Men–New Kids on the Block–98 Degrees tour.

But this class is more than a trip down memory lane: The aerobic workout also tones muscles. Kid 'N Play's Charleston-like hopping works calves and quads; the Robocop (imagine pulling invisible ropes) targets the chest and arms; and all that squatting in the Hammer Dance tones glutes and hamstrings.

I feel all those muscles working when Warren pauses the music during a beat in the routine where we are supposed to hit our marks with arms crossed like LL Cool J. She surveys the studio. Most of us are standing like Russian folk dancers, shoulders and hips aligned with yogic perfection. We are a group of many races, but there's just no other way to say this: We look so … white.

"Loosen up, guys! Half the move is the attitude!" Warren says. Sudeikis stiffens her spine to bring her shoulders in line with her hips, mimicking us. "You're here," she says. Then she relaxes, shifts her weight to her back foot, and cocks her torso. "You need to be here." I try it and feel my obliques engage. "Yes!" Sudeikis shouts to the room. "Instagram it!" Warren turns the music back on and Bell Biv DeVoe's "Poison" fills the studio. I am definitely not fly, but I'm having fun.

"It's a workout, but it's more about the attitude and letting go of inhibitions," Sudeikis says after class. I want to point out it's hard to chillax in front of a mirrored wall, but when Sudeikis rattles off songs she uses in the class, my cynicism deflates faster than Vanilla Ice's career. "'I Wanna Sex You Up,' 'Motownphilly'—who doesn't hear those and smile? Even if you were in kindergarten when they were on the radio, you remember them."

Actually, I was 12, going to dances in the darkened lunchroom of Robert K. Shafer Middle School, where my asymmetrical bob and I attempted to kick it to Salt-N-Pepa. I drop down to demonstrate one of my horribly incompetent moves from back in the day. Sudeikis looks at me. "Yes! Exactly!" she says. "I think you're ready for a fly name. We're gonna call you J-Gold." After that workout, it's more like "Abs of Steel."

Visit marieclaire.com/dance for the best dance classes in your city.

This content is created and maintained by a third party, and imported onto this page to help users provide their email addresses. You may be able to find more information about this and similar content at piano.io
Advertisement - Continue Reading Below
More From Health & Fitness
Frida Mom Ad Shows the Struggles of Breastfeeding
Considering Changing Up Your BC? Read This First.
Created for From Marie Claire for Created by Marie Claire for
Twirla
Advertisement - Continue Reading Below
Texas DV Shelter Destroyed by the Winter Storm
What We Know About the B.1.1.7 Variant
The “Invisible Disability” You’ve Never Heard Of
Why I Got the COVID Vaccine at 32 Weeks Pregnant
Power Pick: SoulCycle's At-Home Bike
Yes, You Should Be Taking a Probiotic Every Day
The Best Workout Apps for Women Who Want Results
Pilates Mats for Crushing Your Fitness Goals With