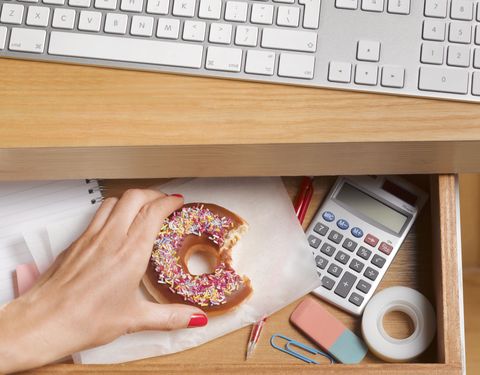 Look at it like this: You could keep washing down your nightly Entenmann's with Franzia and die happy but younger than you might have otherwise, or you could read up on the latest scientific research, recognize that this is destructive behavior, and maybe cut back to one slice of Salted Caramel Iced Cake a week or something.

All I'm saying is that science is like your mom in that, underneath all the nagging and fear-mongering, there are noble intentions. And maybe I'm also saying that I'm just the messenger here, so don't be directing bad vibes toward me when you get to the part about pizza.

A nine-year study published in the Journal of American Geriatrics Society found that people who drank at least one diet soda every day demonstrated a 3.16-inch increase in their waistlines. Correlation doesn't equal causation and all that, but more belly fat is just another bullet point on the long list of Reasons You Should Quit Now If You're Still Downing Aspartame-Laced Fizzy Water.

In a massive analysis of 70 other studies, researchers found that the likelihood of death increased by 26 to 32 percent for those who live alone and have infrequent social contact. More good news: The effect was more pronounced in participants younger than 65, so yeah, I'm going to skip the rest of today and go talk to so many strangers. Of course, the results depend largely on feeling lonely and socially isolated, but even if you prefer your own company, keep in mind that friendship is associated with higher self-esteem, lower levels of cortisol, and, you know, the Roseto effect.

Tasty, tasty, pizza (and cake and junk food and your dreams)

Hide your (Sour Patch) kids, hide your fries—this study from the University of Michigan finds that not all foods are equally addictive and that highly processed ones may "share characteristics with drugs" most of all. While this isn't terribly, terribly surprising, it's like a fork in the gut that researchers felt the need to single out cake, pizza, and chocolate.

Ta-ta, Two-Buck Chuck? Kevin Hicks, who spent 15 years in the wine industry before opening his own lab,says budget vino can contain up to five times the max amount of arsenic the Environmental Protection Agency considers safe for drinking water. Arsenic levels varied by vintage, variety, and brand, but overall, the lower the price, the higher the amount of carcinogenic chemical element. Chateau Margaux, here we come.

Is It Safe to Work Out Hungover?

Nail Biters, Rejoice: Your Chewed-Up Fingers Are Proof That You're Perfect

Chelsea Peng I'm Chelsea Peng, the assistant editor at MarieClaire.com.
Advertisement - Continue Reading Below
More From Health & Fitness
What Staying Awake for 36 Hours Does to Your Face
The Best Workout Apps for Women Who Want Results
Advertisement - Continue Reading Below
The Mental Health Apps Professionals Recommend
How to Be More Spiritual in 2020
Sleep Supplements for Sweeter Dreams
Are New Year's Resolutions Still a Thing?
Gifts That Will Delight and Destress
Products Every New Mom Will Love
Found: The Best Running Sneakers
Debunking the Dangerous Hymen Myth