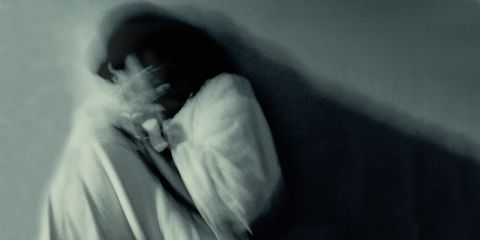 Nightmares are something we all think we've left behind as years go on, along with baby blankets and a fear of monsters in the closet. Sure, they were bad, but after getting the chance to sleep in mom's bed, you were "cured." It was like nothing even happened. Unfortunately in adult real life, it's not always so simple.

For months on end, during my junior year of college, I had nightmares—every single night. I would jolt awake in a cold sweat, grasping at the sheets. I would shake my head, unsure of where I was or what was happening. After finally convincing my heart to remain in my chest, I would calm down by reminding myself of the power of imagination. Despite this, I carried the weight of fear and anxiety from my slumber throughout the following day.

Though my dreams have always been vivid, they were hardly what you would call scary. Nonsensical accumulations of a day's events followed by frequent appearances by my dream boyfriend were common; nightmares, however, were few and far between.

But when they started, they were incessant. And highly disturbing. And when it came to subject matter, they ran the gamut—from finding out I was pregnant to being chased by a deranged killer. If you've ever believed the theory that if you die in your dream, you'll die in real life, I can personally tell you it's *not* true. I've died more times than I can remember.

"I've died more times than I can remember."

Earlier in my life, I developed the ability to control my dreams—called lucid dreaming—by picturing it and creating the scenes first in my head. When that happened, sleeping was fun. It was like being the director of the best reality show where anything can happen and you get everything you've ever wanted. But after the nightmares started, they knocked out my capability to lucid dream. No matter how sweet the picture was before I drifted off, it always turned into something sinister. Some mornings I would wake up way before my alarm because of a terrible dream, forgoing all hopes of going back to sleep. I was scared and I was tired. Really tired.

The worst part of it all was being unable to shake the distressing feelings once I woke up. The day after a bad dream (which was every day), I would be unfocused, irritable, and all around dispirited. Even in the rare moments when I couldn't remember the dream—had no idea why I had screamed, or cried, or broken out in a cold sweat—the feeling of fear was constant. Like a ghost, my dreams haunted me—long after I awoke.

Sleep became a chore. No matter how tired I was, I would toss and turn for hours. I took sleep aids because I would pass out quickly and have no recollection of the dream the next day. Unfortunately, they didn't always work.

I started to get desperate and Googled "nightmares" like crazy for solutions. Now, the one thing I've learned from self-diagnosing via Web-MD is that it's the worst thing ever and you will most likely definitely end up falsely deducing that you have a terminal illness.

So, finally, I went to a real doc for real answers. According to clinical psychologist Dr. Janet Kennedy, Ph.D, founder of NYC Sleep Doctor and author of The Good Sleeper: The Essential Guide to Sleep for Your Baby (and You), one of the causes of nightmares is stress.

It all made sense. School work, extracurricular activities, and the constant, looming reality of midterms (damn you, quarter system) were wearing me down—physically and mentally. (So I am a normal, overcommitted, running-on-three-hours-of sleep college student after all! What a relief.)

But finding the trigger isn't enough. Like most things in life, diagnosing the problem is way easier than solving it. Furthermore, many behaviors, phobias, and traumatic events can elicit nightmares and if left unaddressed, these dreams can wreak serious havoc on your mind, body, and soul. "Recurrent nightmares can lead to sleep loss, fear of sleep, insomnia, and other emotional distress," says Dr. Kennedy.

In an annoyingly cyclical series of events, stress begets more stress. It's clear that a good night's sleep is vital for pretty much everything, and luckily there are some methods that are just as effective as mom's bed. "It's important to create effective boundaries between daytime stress and nighttime such as exercise, medication, reading, stretching, or turning off phones and email," explains Dr. Kennedy. "A bedtime routine is also important to unwind and get ready for sleep."

High-sugar late-night snacks and excessive alcohol before bed can also prompt bad dreams. (So say goobye to your nightcap.)

As for me? After attempting to reduce stress and letting go of my 11 p.m. snacking habit (that coincidentally was also a result of stress) my dreams are, well, weird...but no longer debilitatingly terrifying. I no longer fear the night or the dark or my mind. And I call that a victory.