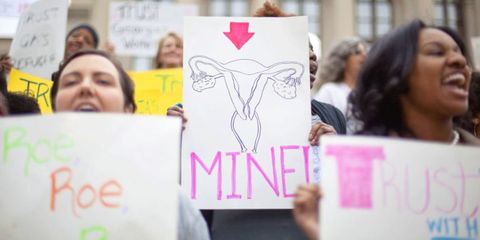 Almost every single American woman—99 percent of us, no matter our political or religious leaning—will rely on birth control at some point over our lives. Most of us will use it for an average of 30 years. That's a relationship that lasts longer than many marriages—much less your relationship with your job, apartment, city, or that cute car you just put a downpayment on.

Whether your pick is the pill, an IUD, condoms, or any mix of the 14 methods available to women today, these are our ride-or-die companions for most of our child-bearing years. And our contraceptive choices impact our lives in ways we might not even think about, like helping us move forward in our careers. Without birth control, how could any of us plan our lives, our next steps, make a five-year plan?

So in a world where contraception is necessary not only for family-planning but for life-planning, why are we still fighting for it? Why do we still have to convince (mostly white male) lawmakers to give us access? All forms of contraception are covered under Obamacare, but for many people, it's still a long fight to work the system. And this year, Congress has been on the warpath to defund Planned Parenthood, which provides birth control counseling to millions of women.

But Congress's views don't reflect those of the country. A new survey by The National Campaign to Prevent Teen and Unplanned Pregnancy found that an overwhelming majority of U.S. adults from all political parties want women to have better access. Eighty-six percent of adults, including 91 percent of Democrats and 83 percent of Republicans, "support policies that make it easier for those 18 and older to get the full range of birth control methods," the Campaign found. A huge majority—71 percent—say the same thing about teens' access to birth control. And 78 percent say that more people would use birth control if it was easier to access. In a country where 50 percent of pregnancies among women in their 20s and older are unplanned, these are numbers to pay close attention to.

Women want it, Americans want it—but our lawmakers are holding us back. And it's insane that we're still fighting for these rights in 2015.