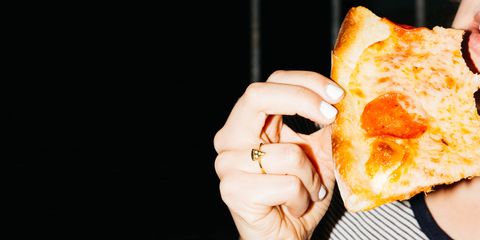 Great news: Prepare your body. Prepare your life. There are going to be so many more dollar slices and doner kebabs coming your way—and *not* just when you're lit. (No, this isn't one of those "Doctors Want Her Dead Because She Just KNOWS the Secret to Everlasting Youth" ads. We're fairly sure.)

When Keri Gans, author of The Small Change Diet and the chillest RDN we know, finished evaluating various drunk foods (you know you want to), she casually spit truth re: women and our drunkenness and maybe a little about why we don't feel like we "deserve" a Cheesy Core Burrito until we're too faded to care. "Women tend to go with foods they never allow themselves when they're not drinking," Gans said. "So I always tell my patients—I would insist in their lunches, for instance—that they put a slice of pizza in there. Because if they started eating pizza when they weren't drunk, they didn't pig out on it when they were drinking. All of a sudden, they're not evil foods anymore—they're foods that are part of your regular meal plan."

Did everything just change for you too? Did you reconsider the 80/20 rule—but the *real* 80/20 rule, not the 95/5 everyone you know does? Did you immediately rush out for a corn dog? Of course nobody's saying we ought to turn our birthdays into a lifestyle (at least not in this sense), but what if sometimes, in moderation, we really did allow ourselves to eat what we actually wanted—instead of waiting to let our impulses take over? It goes back to disassociating broccoli from "good" and bodega sandwiches from "bad," but it also brings us to the ongoing conversation around the real reason women drink: to escape, if just for a Friday night, from an unsatisfying, often unfair reality.

In this case, overthinking and over-feeling about food means that this corner of the cold, cold world is somewhat self-constructed. So, as Reagan would say, "Mr. Gorbachev, tear...down...this...wall." And have some cheese sauce while you're at it.

Chelsea Peng I'm Chelsea Peng, the assistant editor at MarieClaire.com.
Advertisement - Continue Reading Below
More From Health & Fitness
How to Be More Spiritual in 2020
Sleep Supplements for Sweeter Dreams
Advertisement - Continue Reading Below
31 Must-Have Workout Apps for Women
Are New Year's Resolutions Still a Thing?
Gifts That Will Delight and Destress
Products Every New Mom Will Love
Found: The Best Running Sneakers
Debunking the Dangerous Hymen Myth
The Virginity Testing Crisis
Carpe Diem? YOLO? Here's What a Shrink Has to Say