The box said you have to wait two minutes but it was there right away. In the unkempt bathroom of the college house I shared with six girlfriends, I pulled the wet stick out from between my thighs. By the time I stood up, clear as day was the pink plus sign, confirming my suspicion that I had royally fucked up this time.

I collapsed onto the couch while my on-again off-again partner stared at me, eyes wide. I held up the test so he could see for himself that the exhaustion and queasiness I’d been complaining of weren’t just symptoms of an extended hangover. In my hand was the despicable truth: I was a drunk. I was irresponsible. And now, I was pregnant.

"It already says positive," I sobbed, distressed at not being able to deny it anymore. For just a few moments, I let the fear and the enormity of it grip me. I cried without restraint or obligation. When I glanced up, the person who should’ve been holding my hand was standing on the porch, smoking a cigarette.

I had known immediately, without doubt, what I had to do.

After the initial revelation and subsequent crying spell, I sprang into action. An hour later, I called the Planned Parenthood in my hometown, which was 45 minutes away, and stammered into the phone:

“Are you calling to schedule a prenatal care visit?”

“No. I’m calling to schedule an abortion.”

The Truth About Abortion Reversal 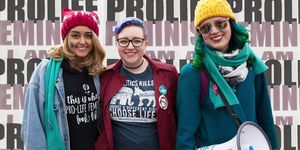 Can You Be Feminist and Pro-Life?

The receptionist asked me a few more questions and gave me the earliest available appointment for the following week. I’d imagined that you could get an abortion any time, any day of the week. But to my shock and dismay, I would have to stay pregnant for seven more days. I was a little panicked about remaining that way. Though my best friends were in the know, I felt like I was telling the rest of the world a giant lie simply by existing in my body.

At the same time, I abandoned my sadness. Why should I grieve, after all? I had known immediately, without doubt, what I had to do, and had shared my plan with my quasi-boyfriend. Any feelings he had were silent and short-lived—he got to forget what he never wanted to know in the first place. When I told him I was going to have an abortion, he was clearly relieved. I didn’t mind his transparency. But he didn’t ask how I felt, not a moment or a week or a month later. He never brought it up at all.

Any feelings I might have had about terminating the pregnancy seemed meaningless and unwelcome. I wouldn’t shed tears over the baby that wouldn’t be again, at least not for many years to come. Instead, I pushed it all into a place I was certain I’d never be able to find.

For a week I gagged while walking to class, choked down meals, and hid in my room, away from parties and liquor and cigarettes. It wouldn’t matter if I smoked or drank myself into oblivion, but I didn’t want to. I was too sick to swig whiskey in the first place. Even the dreadful smell of my roommate’s burnt toast sent me darting to the bathroom. But it felt better to be alone, where I could be certain I was neither mourning nor celebrating. I awaited my appointment by doing nothing other than feeling tremendously sick and looking forward to not being sick anymore. Then on a Wednesday morning, I drove anxiously back to Baltimore for the procedure.

I jittered in the waiting room, my mother sitting quietly next to me. Finally, I heard my name, the very last patient—the last woman of the day to be set free. The operation was short, but more painful than I’d anticipated. I let out a sharp, unexpected shriek and the assistant wiped a spot of blood from my thigh. Afterwards, my mother drove me home and fed me fajitas that I ate ravenously—my sickness had instantly evaporated. When I climbed into my childhood bed that night, I called my not-baby’s not-father, but he didn’t pick up. I found out later that while I’d been home in Baltimore aborting the fetus that was half his creation, he’d gotten back together with his ex for the night. It felt like he was celebrating.

I drove back to school in the morning. I was emotionally and physically back to normal. I had made the only choice I felt I could trust, and I was overwhelmingly grateful for my ability to make it. Having a baby would’ve been a terrible idea. I was in college, barely passing my classes, and drinking like a fish. I would struggle with abusing alcohol for years to come, but at that point in my life, I’m not sure motherhood would’ve been enough to pull me from its grip. In truth, it likely would’ve sunk me deeper. My abortion also marked the end of an unstable relationship I didn’t want to be in anymore. The lack of maturity or support made me realize I could never see my ex in the same light again.

I've always been a good feminist and a believer that a woman has the right to a safe, legal abortion.

My choice hadn’t been easy, but I had been sure of it. So I wouldn’t feel guilty. I wouldn’t grieve. I've always been a good feminist and a believer that a woman has the right to a safe, legal abortion. I was simply utilizing my reproductive rights, like many women I knew did. I told myself it was the best decision that could be made in a less than ideal situation. So after a while, I barely thought of it, at least not with any remorse or emotion.

A few years later, I met my current partner. And because I was still a drunk, or because birth control never agreed with me, or because all the women in my family are freakishly fertile, I got pregnant the one time we had unprotected sex. Briefly, I considered not having the baby. But I was older and out of school. I was in a committed relationship. We (usually) paid rent on time. It still wasn't ideal—money was tight and, at 24, I didn't feel ready to have a baby. No one else around me was pregnant yet, and I didn’t feel the pull that I imagine some women feel when they begin intentionally procreating. But I did have a tiny speck of hope that I could handle having a baby and everything that came with it.

Now, at 32, I have two children, each of whom came into my life like hurricanes—from nine months spent relentlessly vomiting to not sleeping for the better part of a year once they were born—they’ve broken me down and remade me 1,000 times over and I’m sure they will again and again. I’ve been a mother for seven years. It is the greatest challenge I've ever known.

What Happens When You Can't Afford an Abortion?

Mostly, the hardness of motherhood makes me realize my abortion wasn’t in vain. A decade ago, I didn't have the grit to become a parent and, especially, to do it alone. I think it would've ruined me because, even on my best day, being a mother sometimes ruins me now. It’s unstoppable and overwhelming, even though I want to do it.

In recent years, though, I’ve thought about the “what if?” When I first felt my daughter kick inside me, I put my hand on my belly and sensed her strength. It struck me that if I had done nothing, I would’ve felt those kicks years before. I have friends now with children a few years older than mine. Sometimes I find myself watching their sons and daughters, understanding that the child I didn’t have would be just their age.

It struck me that if I had done nothing, I would’ve felt those kicks years before.

In these times, I’ve gone down the rabbit-hole of imagining my almost-child and I’ve grieved. The grief comes out of nowhere and hits me in the chest. Sometimes I cry in the shower and my heart aches with the bitterness of knowing there would’ve been another person in the world had I chosen differently. I barely stopped to consider it then. I hadn’t envisioned another choice because, to me, it didn’t really feel like one. My mind was made up then, but I’m a different person now. I’m a mother and so my heart aches like only a mother’s can.

The Secret Evangelicals at Planned Parenthood

For a long time, I didn’t think I had the right to acknowledge those feelings at all. I had moved on quickly and purposefully in the first place because there had been no point in feeling those dark feelings. Besides, it wasn't a miscarriage or a tragedy—it was a choice. But it’s one that doesn’t come with a rule book on how to feel.

Being a mother has mostly made me more grateful that I got to choose when to become one. The right to a legal abortion is essential because women will always need the option, whether it's legal or not. History tells us that when women don’t have access to abortions, terrible things happen. Children are born into dire situations, foster homes become overcrowded with unwanted children, families spend their lives in poverty, women die in alleys or on the tables of unlicensed practitioners.

Still, believing that safe, legal access to abortion is a woman’s right is one thing. Deciding to have one, personally, is another. Because we force people to fall on one side of the political spectrum—we are either pro-choice or anti-choice—the act of abortion is sometimes viewed as clear-cut. But it isn’t. Not always.

Being a mother has mostly made me more grateful that I got to choose when to become one.

Statistically, there are a very small number of women who regret their abortion. I don’t exactly regret mine. It’s a decision I wish I’d never had to make, and a choice that I now realize will stay with me.

It’s taken me years to admit, even to myself, that my abortion wasn’t as simple as I wanted it to be. But maybe it doesn’t have to be simple. Being a good feminist or, at the very least, a woman who believes in choice, doesn’t mean that I can’t still have complicated feelings about the choice that I made. Maybe we just have to admit that there is no one-size-fits-all way to feel, or to not feel, or to carry on.

.
This content is created and maintained by a third party, and imported onto this page to help users provide their email addresses. You may be able to find more information about this and similar content at piano.io
Advertisement - Continue Reading Below
More From Politics
What Liberation Means This Juneteenth
Kathryn Garcia: It's Time to Step Up or Shut Up
Advertisement - Continue Reading Below
A Valedictorian Speaks Out Against Abortion Bans
Standing Between Care and Violence
Seeking Healing a Century After the Tulsa Massacre
What to Know about Texas's Abortion "Trigger Ban"
A New Book Invites Us to Rethink Menstrual Equity
We Must Remember George Floyd's Legacy
This Is How Much Joe Biden Is Worth
Joe Biden's Granddaughter Is His Biggest Fan