Donald Trump's upcoming visit to the U.K. has allegedly been downgraded.

The London Evening Standard is reporting that the upcoming trip has been "stripped down" and will now be a working trip as opposed to a formal state visit.

That means none of the pomp and circumstance Trump is known to love, and he won't be staying in London as a guest of the Queen. Rather, the visit "is likely to form part of a tour of several countries by Mr Trump," reports the paper, and he would likely stay with U.S. ambassador Woody Johnson. 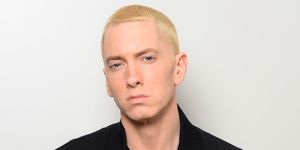 The news comes after months of controversy regarding the visit. It was initially announced back in January during Prime Minister Theresa may's visit to the White House, when she extended an invitation to President Donald Trump and the First Lady from Queen Elizabeth II.

"I have today been able to convey her majesty the Queen's hope President Trump and the first lady would pay a state visit to the United Kingdom later this year, and I'm delighted the president accepted that invitation," May said at the time, and Trump reportedly hoped to play golf with Her Majesty, and to emulate the photogenic moments captured on Ronald Reagan's State Visit in the '80s.

The notion of Trump meeting with the Queen immediately prompted a petition to block the visit. It has since garnered nearly 1.9 million signatures. "Donald Trump's well documented misogyny and vulgarity disqualifies him from being received by Her Majesty the Queen or the Prince of Wales," reads the document.

The controversy was compounded by deeply unpopular statements Trump made on Twitter, following the terrorist attack at London Bridge, about the city's mayor Sadiq Khan. "The U.S. president said he did not want to come if there were large-scale protests and his remarks in effect put the visit on hold for some time," wrote the British publication The Guardian at the time.

The visits has reportedly been postponed until 2018.

Regarding the story that the trip has been "downgraded," a spokesperson for Prime Minister Theresa May’s office told People the invitation has not changed, "Our position on the State Visit has not changed—an offer has been extended and President Trump has accepted. Exact dates for President Trump to visit have not yet been arranged."

Caroline Hallemann Senior Digital News Editor As the senior digital news editor for Town & Country, Caroline Hallemann covers everything from the British royal family to the latest episodes of Outlander, Killing Eve, and The Crown.
Advertisement - Continue Reading Below
More From Politics
Everything We Know About Senator Warren's Husband
Mayor Pete's Husband Would Be a "First Gentleman"
Advertisement - Continue Reading Below
How a Parkland Mom Turned Her Grief into Action
He Voted for Trump. She Voted for Bernie.
How Guerrilla Feminists Are Fighting Femicide
Who Was Mayor Pete's Father, Joseph Buttigieg?
Nancy Pelosi, Icon, Ripped Up Trump's SOTU Address
Thoughts From a First-Time Caucus-Goer
And Now, a Word From the Future Voters of Iowa
Ayanna Pressley Wants Total Justice for Survivors