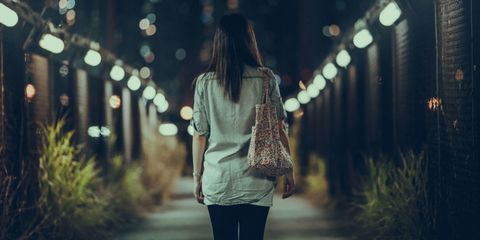 Getting catcalled can ruin your day — but scary new research shows the damage can last way longer than that. According to a study published in the journal Sex Roles, women who are sexually objectified are more afraid of the world around them, and that can have lasting psychological impact.

Researchers from the University of Missouri-Kansas City wanted to see if there was a connection between being objectified and having psychological distress. They defined objectification as separating a woman's body from the rest of her person for someone else to consume.

They studied 133 African-American women and 95 white women who were undergraduate students. Participants answered survey questions about being sexually objectified, like, "How often have you been whistled at while walking down the street?" They also answered questions about how afraid they were of rape or other crimes, their perceived risk of crime, and general feelings of depression or anxiety.

The results of the study are a serious look at how being objectified can mess with your mind. Researchers found that sexual objectification had a direct role in women's fear of crime. Women of color were especially affected; African-American women felt more afraid of crime and had more psychological stress than white women. Researchers say this is likely because African-American women are more likely to be sexually objectified in the first place.

"Women bear the scar tissue of a sociocultural context where rape is epidemic," lead researcher Laurel Watson said in a press release. "Challenging and eradicating the widespread acceptance of sexual terrorism, in its many forms, is key to increasing women's sense of safety, freedom, and movement in the world."

Hidden Camera Shows How Much Women Get Harassed Every Day

When Geeks Attack: Sexual Harassment in the Tech Community

How to Defend Yourself 101