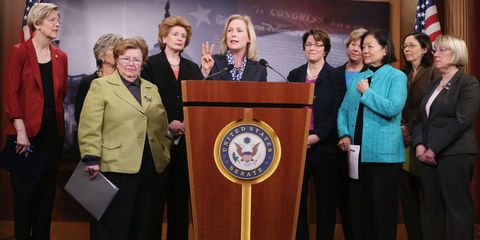 If you kicked out all the men in the U.S. Senate and replaced them with women, maybe things would get done in Washington. That's been confirmed by new research that finds that the women are the ones making most of the deals on Capitol Hill.

According to The New York Times, data-analysis firm Quorum ran the numbers about how male and female senators operate on the job. They got concrete proof for what we all already figured: Women were more likely to work together, cooperate with the opposite party, introduce more bills, and get them out of committee.

Over the last seven years, the average female senator co-sponsored 6.29 bills with another female senator and co-sponsored a whopping 171.08 bills with a senator from the opposite party. For male senators, those numbers were 4.07 and 129.87, respectively. Women tended to introduce more bills in general, which may skew these results, but hey – that could just mean they're more productive at work.

Quorum elaborated on the numbers in a blog post, noting that female senators have a long history of holding bipartisan dinners, forming personal and professional relationships in the process. That might lead them to work together more.

And though women in the House do co-sponsor bills together more than their male counterparts, the effect isn't as strong as in the Senate—where, clearly, women are doing something really, really right, even if there aren't a lot of them. (20 percent of the Senate, to be exact.)

How the Pay Gap Affects You: Worst States for Working Women