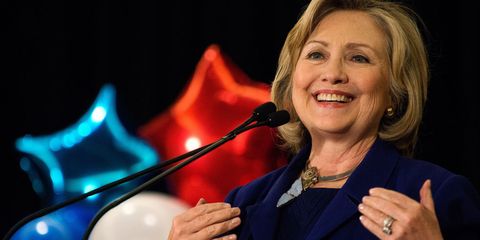 Hillary Clinton is with it, guys: The presidential hopeful's campaign has reportedly nailed down its official home base, signing a lease on a building in Brooklyn Heights to act as its headquarters. While we're sure there are important reasons behind choosing this particular locale, we should also note that the building they chose advertises itself as "Modern Offices. Brooklyn Cool." 'Nuff said.

Other possible factors? The building is situated conveniently to several subway lines, Brooklyn's downtown area, and Lena Dunham (as well as Broad City's Abbi Jacobson). And FWIW, the view of Manhattan is just spectacular.

Meanwhile, does this mean we can expect an official Clinton 2016 announcement soon?

Victoria Dawson Hoff Associate Editor Victoria Hoff is the associate editor at ELLE.com, covering everything from fashion to beauty to wellness.
This content is created and maintained by a third party, and imported onto this page to help users provide their email addresses. You may be able to find more information about this and similar content at piano.io
Advertisement - Continue Reading Below
More From Politics
How to Help Black Lives Matter If You Can't Donate
Does Your State Have a Tampon Tax?
Advertisement - Continue Reading Below
What's Ranked-Choice Voting? Allow Us to Explain
Paid Leave for All Isn't Just a 'Women's Issue'
Yes, Caregiving Is Essential Infrastructure
Unforgettable Signs From the Protests
23 Ways Women Still Aren't Equal to Men
Ma’Khia Bryant: What We Know
Greta Thunberg Expertly Trolled Boris Johnson
The Hope and Heartbreak of Derek Chauvin's Verdict