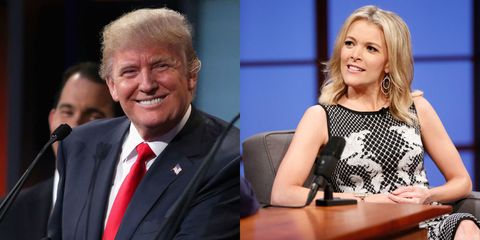 Original 8/25: In case you've successfully blocked it out of your mind at this point, Donald Trump and Megyn Kelly haven't exactly been cool lately. The GOP frontrunner went after the Fox News host  after she criticized his comments about women during the first primary debate. He even said she had "blood coming out of her wherever" during the broadcast.

Kelly took some time off recently and came back to her show Monday night. And the Donald was waiting. On Twitter, Trump started things off by gloating about her "eleven day unscheduled vacation," and then attacked the substance of Monday's show. (It may have been because she highlighted critics of Trump's immigration policy.)

And then the retweets poured in. Trump retweeted supporters who called her a "bimbo" and that she came back "looking like Nancy Grace," among other choice turns of phrase.