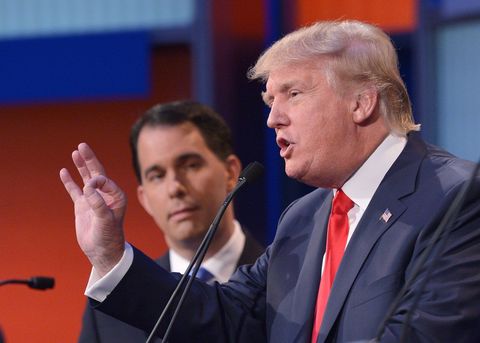 Wednesday night is a big one in the world of politics. It's the second Republican presidential debate. Here what you should know about the debate —whether or not you plan to watch it.

1. The basics. The top 11 Republican candidates will debate at the Ronald Reagan Library in California, beginning at 8 p.m. Eastern Time. It will air on CNN. A free live-stream will also be available at CNN.com. Four candidates didn't make the cut for this event, but they will square off at 6 p.m. Eastern Time in a separate debate that will also air on CNN. Another candidate, Jim Gilmore, the former governor of Virginia, is excluded from the early debate because his poll numbers are hovering just above 0 percent. Gilmore has said he will live tweet the debate.

2. Here are the 11 candidates taking part in the primetime debate:

4. So what's going on with Donald Trump? He's still the front-runner in the Republican field, with 27 percent of Republican primary voters favoring him, according to a New York Times/CBS News poll released Tuesday. He'll be the centerpiece of the debate, much like he was the first time the candidates met in August. And many of his rivals appear poised to attack him. It also seems likely that Trump will do some attacking of his own, taking aim at Ben Carson, who is gaining steam in the polls, and Carly Fiorina, whose record — and appearance — he has criticized.

5. Who, exactly, is Carly Fiorina, and why is she in the primetime debate this time? Carly Fiorina is the former CEO of computer company Hewlett Packard. The Californian tried and failed to run for Senate back in 2010, and created the most epic campaign ad ever. Two words: Demon sheep.

She's still a long shot to win the nomination, but Fiorina kicked ass in the first GOP debate, even though her poll numbers weren't high enough for her to appear among the top candidates. (Fox News, which aired the first debate, held a primetime debate with the 10 highest polling candidates as well as a contest among the candidates with the lowest poll numbers.) This time around, however, she'll debate among the major players, because her poll numbers shot up between then and now. And get excited, because she's promising to challenge Trump, "the entertainer who's running for office."

6. And who is Ben Carson? Why are people suddenly loving him? Ben Carson is one of the most famous surgeons in America. He was the first neurosurgeon to successfully separate conjoined twins, and Cuba Gooding Jr. even played him in a TV movie called Gifted Hands.

Lately, he's parlayed his inspiring story into a career in politics, writing successful books and speaking out against the Affordable Care Act, otherwise known as Obamacare. Similar to Trump, people like Carson because he's a political outsider. But Carson also gets points for speaking out about his Christian faith and rags-to-riches upbringing.

During the last debate, Carson, who is African American, gave a touching speech about how skin color doesn't matter, and his poll numbers have spiked ever since. The same New York Times/CNN poll that puts Trump in the lead with 27 percent has Carson not too far behind at 23 percent. Yahoo News points out that some Republicans may support him to combat the idea that the GOP has problems with race.

7. What about Jeb Bush? Many people had expected Jeb, who's the former governor of Florida and brother of President George W. Bush, to be the leading Republican candidate. Then Trump happened, and it made Jeb — who's already a reserved politician — seem downright boring. He's been trying to shake this snoozy reputation, pulling open his shirt at a recent campaign event to reveal a vintage Reagan/Bush T-shirt and appearing on the first episode of The Late Show With Stephen Colbert.

But he's a long way off in the polls, with just 6 percent saying in The New York Times/CBS News poll that they favor him. Look for Jeb to to show a little spark at this debate while securing his niche as the candidate with the most attention to detail.

8. Isn't Marco Rubio someone people like? Yep, but he's tied with Jeb and Mike Huckabee at 6 percent, according to that New York Times/CBS News poll. Rubio is a senator from Florida, and at 45, he's the second youngest Republican candidate. (The youngest contender, Louisiana Gov. Bobby Jindal, is only about a month behind him.) But don't expect fireworks from Rubio during this debate. Some have speculated that he might be aiming for vice president, which means he'll likely avoid harshly attacking the front-runners.

9. Will there be another Megyn Kelly moment? During the first debate, Fox News' Megyn Kelly stole the show with her epic back-and-forth with Trump, and the fallout lasted for weeks. CNN, for its part, is going with one main moderator, Jake Tapper, and two other questioners, Dana Bash and Hugh Hewitt. Tapper's hoping to avoid putting himself in the middle of things. "My goal is more about: Let's draw the contrasts between the candidates, and have them fight it out over these policies," he told The New York Times. So expect even more squabbling between candidates this time.

10. Bottom line: This is the second of 12 Republican debates. It'll be entertaining because of Trump. And CNN is certainly expecting a lot of viewers. The first debate, which aired on Fox News, attracted 24 million viewers, making it the highest-rated primary debate in TV history. But the race is far — far — from decided. And in case you're wondering, the Democrats will also be debating soon. They face off Oct. 13 in Las Vegas.

Michael Sebastian Michael Sebastian was named editor-in-chief of Esquire in June 2019 where he oversees print and digital content, strategy and operations.
This content is created and maintained by a third party, and imported onto this page to help users provide their email addresses. You may be able to find more information about this and similar content at piano.io
Advertisement - Continue Reading Below
More From Politics
Gwen Berry: Athlete, Activist, Olympian
The Anti-Choice Endgame: Power And Control
Advertisement - Continue Reading Below
Give Domestic Workers the Protections They Deserve
Kristin Urquiza Wants Justice for COVID-19 Victims
A Breakdown of VP Harris's Net Worth
WH Announces Removal of the Hyde Amendment
What Liberation Means This Juneteenth
Kathryn Garcia: It's Time to Step Up or Shut Up
A Valedictorian Speaks Out Against Abortion Bans
Standing Between Care and Violence