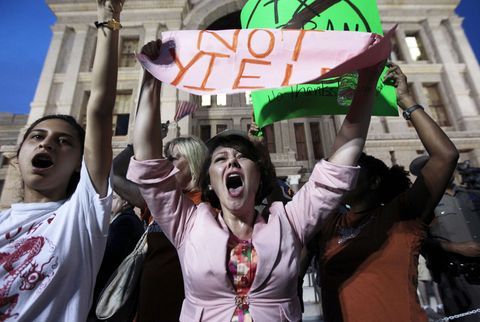 But these anti-choice victories are just two in a series of many. In 2011, Texas passed a law that forced women seeking abortions to get sonograms, listen to a description of the fetus, and wait 24 hours before receiving the procedure. That law also forced doctors to read a medically dubious script telling women, among other things, that abortions might increase their risk of breast cancer.

In 2013, the Texas legislature signed House Bill 2. That's the bill Wendy Davis filibustered her heart out against. It imposed unnecessary and expensive building guidelines on abortion clinics. As of June 2015, there were only 18 abortion clinics left in Texas, down from 41 in 2012. The final provision of House Bill 2 was meant to go into effect on July 1, 2015, but the Supreme Court stepped in and temporarily stopped it from proceeding. If this last provision had been enacted, there would be fewer than 10 abortion clinics left in Texas, a state where over 12 million women live.

In mid-November, the Supreme Court decided to take up the case against House Bill 2, though it will probably not hear the case for several more months. Women in Texas are already suffering as they wait for a final decision. Nancy Northup, the president of the Center for Reproductive Rights, one of the organizations that filed the Texas case with the Supreme Court, says that she's already hearing from Texas health-care providers that they're "seeing an increase in women buying misoprostolon the black market and self-inducing." Women are also having to wait far longer to get the abortions they need: A University of Texas study released in October showed that women must wait as long as 20 days to get appointments at clinics now that there are so few of them.

We spoke with an abortion provider in Texas, Dr. Bhavik Kumar, about what he's seeing on the ground at the clinics where he works, how abortion stigma hurts women, and what he thinks will happen if Texas loses even more abortion clinics.

Jessica Grose: What's a typical workday like for you?

Bhavik Kumar: A typical day at either of the clinics where I work at is busy. We start around 8 a.m. seeing patients. Some days are SMI days — state-mandated info. That's when we have to read a script to women, and after that, they need to wait 24 hours [to get an abortion]. With the same number of women trying to access care [as before the HB2 restrictions], we're seeing longer wait times and higher volumes of women.

One of the clinics where I work is in San Antonio. That's in Central Texas, south of Austin. One is in Fort Worth. At the Fort Worth clinic, we see a lot of women from West Texas, which has no abortion clinics. There are currently two in Fort Worth, and there are two or three in Dallas, which is about an hour away.

JG: How far are women traveling to reach you?

BK: At Fort Worth, some women have traveled as far as five hours one way to get to the clinic, and then another five back. That means they have to stay the night at least one night to have their 24-hour waiting period go by. That's ten hours round-trip that some women are traveling, for a roughly five-minute procedure.

JG: You did your medical training in New York, which is a much more pro-choice state. How was your experience providing abortions different in New York than it is in Texas?

BK: New York is not by any means perfect, but it's pretty good for abortion care. Women can access it same day, they don't have to be read a script, and physicians can practice evidence-informed medicine. There is state Medicaid funding for abortion and contraception care.

In Texas, I feel like I'm forced to say things by the state that I think are medically inaccurate. What ends up happening in that discussion can be really confusing for my patients. They'll say, "You say this based on the state … I just want to not be pregnant, how do I get from point A to point B?" It's not a very empowering moment. In New York, it is. They're taking control of their health and their life, and in Texas, I don't always feel that, and that's because of the state barriers.

In Texas, I feel like I'm forced to say things by the state that I think are medically inaccurate. What ends up happening in that discussion can be really confusing for my patients.

JG: Are you worried for your safety?

JG: Have you noticed changes among your patients as abortion restrictions have gone into effect in Texas?

BK: One thing I've noticed the last few months doing this work is the subtle yet pervasive stigma that comes out of the restrictions that the government puts on abortion care. When you have a layer of restrictions — if you have to wait 24 hours because you need to be told information and go home and think about it, you're restricted on where you can go — the government is making women suffer and feel the consequences of their decision. Women say "I deserve this" or "I never want to be back here." This moment I think can be so empowering is turning into somewhat of a nightmare.

We try to make it as pleasant as possible, and a lot of women thank us, but it's so difficult to get past these barriers. I wonder when women leave from the clinic, how much stigma are they carrying, and how does that stigma manifest? How does it bleed into their lives? Their relationships? Their relationships with future children? It's hard to capture in studies, but it may go into the next generation. It's scary and sad that this is happening in Texas now, but the ripple effects of this are long-term. And that's what I worry about on a day-to-day basis.

JG: What do you think will happen when the Supreme Court hears this case?

BK: My hope would be they decide in our favor. If that happens, that would be great. Women would have more access if and when they need it. If they chose not to and didn't rule in our favor, and we end up with an estimated nine clinics, we're ready. We're stronger and more determined to continue providing care to women in Texas. The number of women becoming pregnant isn't going to change drastically. They may take their care into their own hands, and we don't want that. We want it to be safe and legal for them. Whatever happens, I'm going to be here.