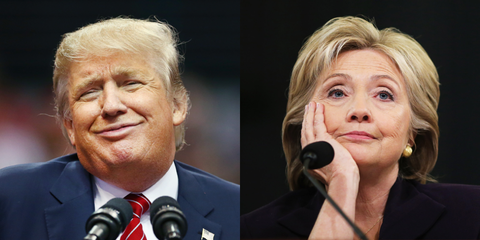 Donald Trump's big mouth has run off again. At an event in Michigan on Monday, the Republican presidential candidate used some vulgar language to describe his main opponent, Democratic frontrunner Hillary Clinton. "Hillary, that's not a president," he said. "Even her race to Obama, she was gonna beat Obama […] she was favored to win, but she got schlonged, she lost, I mean, she lost."

It would be an understatement to say that Donald Trump doesn't have the best record when it comes to talking about women. The GOP presidential frontrunner said Megyn Kelly had "blood coming out of her wherever" when she grilled him during a debate, then insulted Carly Fiorina's face, calling it not presidential. Even his own wife, Melania, has told him to tone it down.

Trump also mocked Clinton's late entrance to the podium during Saturday night's Democratic primary debate. (She had to use the restroom, and the ladies' room was further away from the stage than the men's room.) "Where did she go?" Trump jokingly asked the crowd. "I know where she went. It's disgusting, I don't want to talk about it. It's too disgusting."

The two have sparred before about each other's hairstyles, which are such easy targets for both of them that it's almost boring at this point. But using such crass language about a competitor, and recoiling at the thought of women having bodily fluids, is just a continuation of Trump's gross behavior on the campaign trail. It might be a good topic to bring up at the next GOP debate, moderated by none other than Megyn Kelly. Oh, this is going to be good.