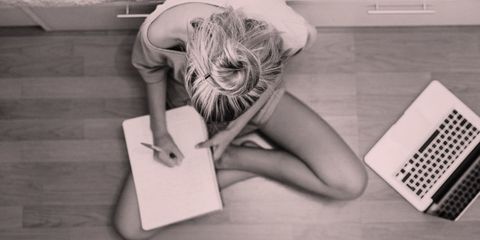 Some of us are brave enough to publicly out those who've sexually assaulted us. Most are not. Instead, we obsess over Detective Olivia Benson, we Netflix every sensationalized Investigation Discovery show about stalked women, we cringe every time our rapist appears in Facebook feeds touting their brand new record/book/stand-up show/TV show/art show/promotion/wife/child.

I was caught in that loop.

The man who assaulted me was older and more respected than me, traveled in similar circles, and most importantly, was in my industry. If I spoke up, I'd be up against not just this man but the industry who supported him. Most of us know the people who raped us, and most of us will do as I did: move away (if you can) and keep quiet.

This man had a dangerous MO involving alcohol and young women. He both loathed himself and felt competitive with the new generation of female artists. I'd seen him chuckling with girls, dropping backhanded compliments about their accomplishments, preying on those who had no power but desired affirmation from the expert—him. I was ashamed to say this was how he got me, but I knew I wasn't the only one. So it occurred to me: What if he doesn't actually realize what he's doing?

The answer presented itself easily: I would email him.

It took me a full day just to decide how to address him. Do you say hello or just get right into it, like a cover letter for a job? I'd heard once that addressing people only by their first name—even if you didn't know them—establishes a kind of power and respect in the conversation. I'd been using this construction for magazine pitches and BBB complaints and yielding an 80 percent success rate, so I went with first name only.

It took me a full day just to decide how to address him.

My journalism training taught me some handy tips for effective communication: 1. Keep it concise. 2. Don't over-explain. 3. Be objective.

Thinking about my rape and how many times I'd conveyed the story to close friends, conciseness, directness, and objectivity had come into play zero times. I'm always qualifying things—yes we were both drinking but he wasn't blacked-out, and yes I had willingly left with him but I was under the impression that we were "friends." But qualifying puts you on the fence. It makes you sound like you did something wrong. And this is how many women (and men) are taught to talk about their sexual assaults. Our language betrays us. But language was all I had.

In four short paragraphs, I laid out what happened. I said I had been irrevocably changed. I said I had tried to press charges but was told it wasn't a good idea. I said the dynamic of our shared community was flawed, that it prized men over women and consistently placed women in a situation where they had to prove themselves over and over again, enduring a mind-bending combo of soft and hard sexism (if unlucky) and outright invisibility (if lucky).  I pointed out that this power imbalance was something he took great advantage of.

It was the most difficult letter I've ever written. It took me three days and as many drafts as there were bottles of wine in my recycling bin. Still, I wrote it. And to my surprise, he responded the next day.

I hadn't expected a response. Generally when you write, "Hey, what you did was rape, and I sure am pretty mad about it still," you don't expect a swift rebuttal. Nevertheless, he did write back explaining that he didn't feel our encounter was assault because—wait for it—he had wanted to sleep with me. But, when you write to your rapist, sometimes this is what you get.

I read his letter (which was longer than mine, so at least I win at that), talked it over with my boyfriend, and steeled myself for yet another correspondence. As I read through his carefully worded paragraphs, it hit me: OK, he definitely doesn't know what rape is. And lucky me! I would get to explain it to him.

As I read through his carefully worded paragraphs, it hit me: OK, he definitely doesn't know what rape is.

Throughout his letter, he was apologetic, hinting that he'd known "something wasn't right." So I appealed to him as a human, breaking things down: "If I were a male friend in this situation (blacked-out), would you have acted differently? Would you have, for instance, gotten me water and made me a little nesty bed or a hoagie sandwich?"

The longer I addressed his letter point by point, the easier objectivity became for me. There was so much organizational thinking involved that the process allowed me to see far outside of my own experience, to even empathize with him—or rather, empathize with a culture—as I despised him. This is their training from media, from family, from others who've also assaulted and gotten away with it time after time. But empathy does not ultimately excuse.

So I sent my response. It was measured. It was excoriating and forgiving. But it was conditional. It said, "Now that you know, you're not allowed to go back." A warning or censure, a learning moment. Again, he replied. And he apologized. I felt better. I didn't think I could get past it, but I think, now, I'm getting there.