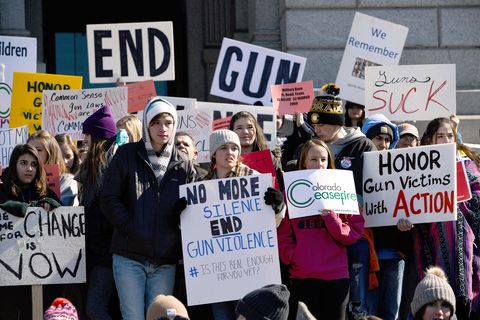 A viral campaign around the hashtag #safetyinnumbers just got the group Everytown for Gun Safety more Instagram followers than the NRA. The movement got started two days after the tragic mass shooting at Marjory Stoneman Douglas High School in Parkland, Florida, which has newly galvanized gun-control advocates.

The campaign was started by Ria Browne, who volunteers as an organizer with Everytown. She started the campaign on February 16, noting that Everytown had 136,000 followers to the NRA’s 545,000. By February 22, Everytown had the NRA beat on Instagram.

Celebrities like Zoe Kazan and Olivia Wilde spread the word about the effort, which helped it gain traction:

“I realized that in the general population there was a lot of emotion but not a lot of organized action and streamlining of information,” Browne told The Fold. “This is a way for us to stick together and show the politicians what a force we are.” She also added that as a parent, she feels it’s important her kids know “we have a responsibility to take care of our fellow humans.”

"The movement to prevent gun violence is expanding at a rapid pace—the momentum is palpable. After tragedy in Parkland, it's inspiring to see so many people rise up to take action," Kate Folmar, communications director for Everytown for Gun Safety, told MarieClaire.com. "We're grateful to the millions of Americans across the country committing to take action to prevent gun violence in all its forms."

Browne’s new goal, she wrote on Instagram, is to get to a million followers for Everytown.