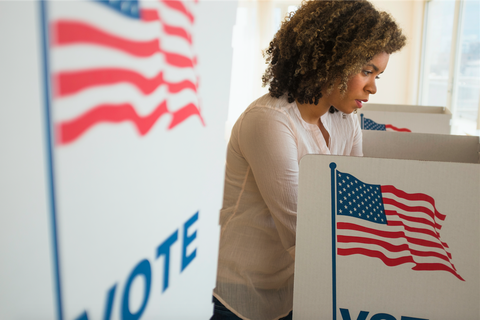 To every person who has ever said, "My vote doesn't matter," please see: Alabama and Virginia, elections, 2017. The stunning victories that occurred at the end of last year gave hope to feminists across the country, horrified at the fact that extreme conservatives have dominated the last few elections. They proved the influence that citizens can have if they remain engaged with local politics and determined to create change.

Which is why 2018's mid-term elections are crucial. Who wins in the upcoming primaries (they start tomorrow, March 6, in Texas!) and gets onto the ballot for November will impact the success of movements like #MeToo, #TimesUp, #NeverAgain, and #BlackLivesMatter.

But there's one issue that weaves its way into all movements: reproductive health. Vice President Mike Pence recently said that he believes abortion will end “in our time.” Not if we have anything to say about it. Access to health screenings, contraception, abortion, and hormone therapy doesn't just affect the individual woman, but affects everything up the chain—mental health, education, the economy, and much more. If you know nothing else about your elected officials, know this: Where do they stand on reproductive rights?

Below, a list of all United States Senate primary candidates who are pro-choice. You're welcome.

All 435 seats in the House of Representatives will be up for re-election this November—but we thought it might overwhelm you to list all of them here. To learn more about the candidates running in your state, go to Ballotpedia, click “House of Representatives,” and find your state. Emily's List, a political action committee that aims to help elect pro-choice Democratic female candidates, has a list of candidates they recommend too.