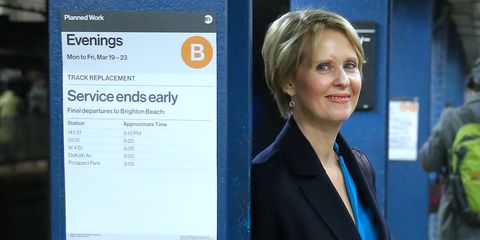 Cynthia Nixon's campaign to be New York's next governor continues. Having called out opponent and current governor Andrew Cuomo in her first video for not fixing New York's "broken subway" system, Nixon found herself delayed by the subway on her way to talk about the problem.

And according to the Associated Press, Nixon used the incident during the campaign event she was running late for, saying that she'd arrived "in the nick of time" because her train went out of service, blaming the delay on "Cuomo’s MTA." Which is smart.

In a hilarious tweet about the incident, Rebecca Katz, a political operative working with Nixon, wrote, "That thing when you're headed to talk about fixing the subways and your train goes out of service #CuomosMTA." Katz also posted a photo of Nixon exiting the stopped train, fully aware of the irony of her situation:

That thing when you’re headed to talk about fixing the subways and your train goes out of service. #CuomosMTA pic.twitter.com/3DfJBpjrDa

"New York is my home. I've never lived anywhere else. When I grew up here, it was just my mom and me in a fifth-floor walk-up... We are now the most unequal state in the entire country with both incredible wealth and extreme poverty... I've never wanted to live anywhere else, but something has to change."

And as CNN reports, "A lot of people expect Nixon to draw votes in New York City, given the headaches surrounding mass transit and the subway in particular."

Related Story
Cynthia Nixon Is Running for New York Governor
Amy Mackelden Amy Mackelden is a freelance writer, editor, and disability activist.
This content is created and maintained by a third party, and imported onto this page to help users provide their email addresses. You may be able to find more information about this and similar content at piano.io
Advertisement - Continue Reading Below
More From Politics
How to Help Black Lives Matter If You Can't Donate
Does Your State Have a Tampon Tax?
Advertisement - Continue Reading Below
What's Ranked-Choice Voting? Allow Us to Explain
Paid Leave for All Isn't Just a 'Women's Issue'
Yes, Caregiving Is Essential Infrastructure
Unforgettable Signs From the Protests
23 Ways Women Still Aren't Equal to Men
Ma’Khia Bryant: What We Know
Greta Thunberg Expertly Trolled Boris Johnson
The Hope and Heartbreak of Derek Chauvin's Verdict