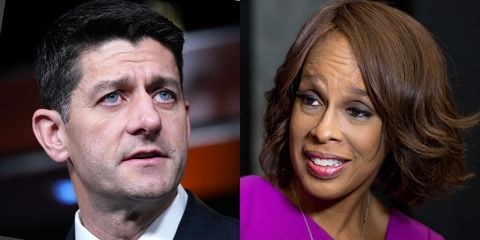 Yesterday, House Speaker Paul Ryan announced he wouldn't be seeking re-election, and today he sat down for an interview with Gayle King on CBS This Morning, during which the co-host grilled him on the lack of diversity in the Republican party—specifically woman and minorities.

She referenced a photo that President Trump tweeted Wednesday that shows Ryan and a bunch of other white male Republican Congressional leaders with their thumbs up. Gayle asks what they were all celebrating, to which he responds, “Just the accomplishments we’ve had heretofore and then the rest of the agenda we’re working on.” Ryan lists off infrastructure and health care bills as agenda items they are working on.

However, King has a different agenda topic in mind and changes the conversation. "I have to say, Mr. Speaker, when I look at that picture, I don't see anyone that looks like me—in terms of color and gender," King said. "And you were one of the main people that said you want to do more for the Republican party, to expand...you wanted to expand the base. Some say this president doesn't really want to expand the base."

After King says she feels "excluded," Ryan tries to defend himself by saying, “I don’t like that you feel that way. We need more minorities, more women in our party."

He says he plans to focus on "inclusive, aspirational politics" and on recruiting more women, like Mia Love. He adds that he's "going to keep fighting for the things [he] believes in," which is, you know, trying to take away a bunch of women's rights, like defunding Planned Parenthood.

Alex Warner
This content is created and maintained by a third party, and imported onto this page to help users provide their email addresses. You may be able to find more information about this and similar content at piano.io
Advertisement - Continue Reading Below
More From Politics
Daunte Wright's Death Sparks Protest in Minnesota
41 Surprising Rules First Ladies Have to Follow
Advertisement - Continue Reading Below
Asian American Women on Where to Go From Here
Syrian Journalists Reflect on a Decade of War
How to Show Your Support for the AAPI Community
Activist Lydia X. Z. Brown on Disability Justice
Elisa Crespo: "I'm Not Here to Make History"
What We Know About the Georgia Spa Shootings
Dianne Morales Has Never Listened to the Naysayers
Stacey Abrams on Her Definition of Success