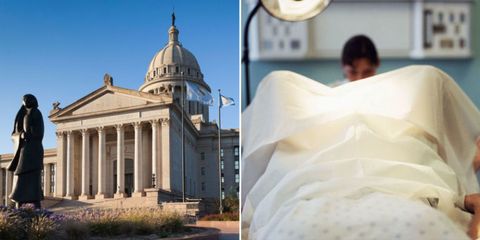 Oklahoma has passed a bill making it a felony—punishable by up to three years—to perform or induce an abortion. The measure would also deny or revoke medical licenses of doctors who provide abortion care in Oklahoma, with the exception in the case of abortions needed to preserve a woman's life.

Yes, the state law seeks to criminalize a procedure that has been a woman's constitutional right in America since 1973. The bill now sits with Gov. Mary Fallin and will become law in five days if she doesn't veto it.

BREAKING: The Oklahoma Legislature has passed a bill that would make performing an abortion a felony.

If you are among those doubting that America has become downright hostile for reproductive rights, Oklahoma's brazen law—the first of its kind—should be a horrific wake-up call. The law is the most egregious in a series of aggressive state laws that impede a woman's access to a safe and legal abortion, including an Indiana law that criminalizes doctors who provide abortions sought after a diagnosis of disability.

Tulsa World reports that Sen. Ervin Yen, R-Oklahoma City, the only doctor in Oklahoma's Senate, said the measure is "insane."

Oklahoma has not been kind to abortion rights. According to the Center for Reproductive Rights, there are only two abortion providers in the entire state, and women face hurdle upon hurdle to access reproductive health care.

CRR has challenged the constitutionality of abortion and reproductive health care laws imposed by Oklahoma lawmakers eight times in the past five years.