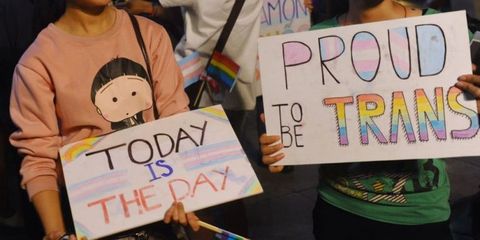 On Wednesday, the Massachusetts House of Representatives voted 116 to 36 in favor of a bill that would protect the rights of transgender people in public spaces.

A slightly different version of the bill was already passed by the Massachusetts Senate earlier this month, and the two versions will need to be reconciled before the bill can be signed into law. However, according to the Boston Globe, state Governor Charlie Baker has already confirmed that he will sign "a transgender public accommodations bill should it reach his desk."

"We've certainly listened to a variety of points of view from many sides and have said, from the beginning, that we don't want people to be discriminated against," he told The Boston Globe. "If the House bill were to pass in its current form, yeah, I would sign it."

While the bill has received backlash from conservative critics, most people have rightly celebrated it as a huge win for LGBTQ rights.