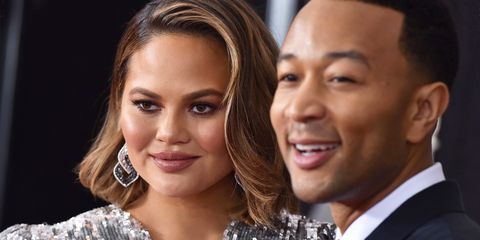 Chrissy Teigen wants her followers to know that she doesn’t care for President Donald Trump, even on the occasion of his 72nd birthday. But on Thursday, she truly went above and beyond, gifting Trump with hundreds of thousands of dollars' worth of donations to the ACLU from her family.

Teigen has a long history of trolling the president to her 10.6 million followers, and has even wished him a happy birthday in the past. But after years of commentary, the leader of the free world eventually blocked the supermodel for hurting his feelings:

But while the courts debate the legality of the President making announcements via Twitter while also blocking citizens he was elected to represent for saying mean things about him to his face, Chrissy Teigen continues to go after him with wit, class, and hilarity.

John and I are outraged to see and hear the horror stories of immigrant families seeking asylum and refuge in America being ripped apart due to the inhumane policies of the Trump administration. These actions are cruel, anti-family and go against everything we believe this country should represent. The ACLU is committed to defending the rights and humanity of these vulnerable families. In addition to fighting for immigrants’ rights, they’re advocating for reproductive rights, voting rights, criminal justice reform, LGBT rights, 1st amendment rights and holding the Trump administration accountable whenever possible.

The President celebrates his 72nd birthday today. On this auspicious occasion, in order to Make Trump’s Birthday Great Again, each member of our family has donated $72,000 to the ACLU.

That is some expert-level trolling and an incredible cause gets to be rewarded for it. Way to go, Chrissy, and keep up the good work.

P.S. If you would like to make a donation to the ACLU, here’s that link.

Cady Drell Culture Editor Cady is the Culture and News Editor for MarieClaire.com, as well as a noted Timothée Chalamet enthusiast.
Advertisement - Continue Reading Below
More From Politics
Is Any Republican Running Against President Trump?
Get to Know CBS News Anchor Norah O'Donnell
Advertisement - Continue Reading Below
Everything We Know About Senator Warren's Husband
Mayor Pete's Husband Would Be a "First Gentleman"
How a Parkland Mom Turned Her Grief into Action
He Voted for Trump. She Voted for Bernie.
How Guerrilla Feminists Are Fighting Femicide
Who Was Mayor Pete's Father, Joseph Buttigieg?
Nancy Pelosi, Icon, Ripped Up Trump's SOTU Address
Thoughts From a First-Time Caucus-Goer