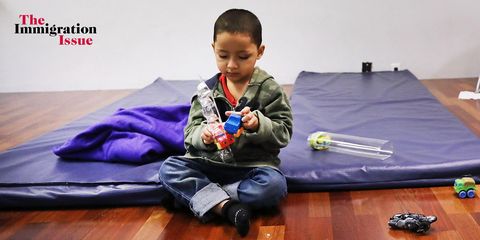 I first met Pedro when he was nine years old and more interested in soccer and girls than in school. I was a reading mentor in an ESL classroom, and Pedro had just arrived in the U.S., one of an influx of Mexican immigrants who’d come north in search of a better life. He lived in a one-bedroom apartment with his family, a large, boisterous group who cooked meals from scratch when I came for home visits. These days, my students, like Pedro, are primarily recent immigrants from Mexico and Central America—but many have been separated from their parents. And their suffering is unlike anything I had previously dealt with.

"Why do they hate us?” my students ask, desperate to understand how their very presence in this country sparks hatred and anger. “Why don’t they just get to know me?”

A woman who identified herself as Jennifer sits with her son Jaydan at the Catholic Charities Humanitarian Respite Center.
Getty Images

I’ve been a teacher for more than ten years. For several years, I taught early-childhood education. Often, in those first weeks of the school year, children cried for their parents. My colleagues and I came armed with training in psychology and child development, with songs, books, and words of reassurance. But my youngest students’ temporary discomfort pales in comparison to the anguish of the children who are being ripped from their parents by the government.

I haven't been able to sleep much this week, if at all. I lie awake and parse the internet, studying the photos of children so young they barely come to the knees of the grownups around them, their faces screwed up in shock and terror. I read about young girls left to care for toddlers who are not their own, and kindergarten-age boys who haven’t spoken in weeks.

I see the pain in my students who have been separated from their parents. I do what I can: I encourage my students to write about their experiences, to share their thoughts with their classmates and with me. Before, they might have asked for help translating a homework assignment, or obtaining winter coats, or finding ESL classes for their parents. These days, they have problems I can’t solve.

"Why do they hate us?” my students ask.

One of my students, Ruben, was showing up to class chronically late, if at all. I often found him sleeping at his desk. It took several conversations, but finally I pieced together the situation: He was an unaccompanied minor whose parents had been sent back to Mexico. Where was he living? I wanted to know. Sometimes with an uncle, sometimes on the couches of friends. What was he eating, who was making sure he did his homework, what happened if he got sick? He bought food from a 7-11 or took home extra meals after his shift at work. His after-school job didn’t finish until midnight, and then he had an hour-long bus ride back home. Between struggling to feed himself, pay bills, and find somewhere consistent to sleep, Reuben was too tired to come to class. “I just want some help, you know, Ms.?” he said. “I try to do this myself, but I can’t do it all.”

Any teacher can distinguish between students who feel secure in their environment and those who feel threatened. Those in the first group are typically confident and happy. They participate in discussions and turn in homework on time. Those in the latter group often become withdrawn and avoid avoid eye contact. Sometimes, they’re vocal in their anger and fear.

Here's one thing I know: While it can take months to win over these students’ trust, being able to converse with them in Spanish is extraordinarily helpful. There are times a student will tell me in Spanish what he won’t voice in English. Is there anyone squatting down at eye level with the children in the detainment camps and listening to their stories? Anyone giving voice to their fears and helping them navigate the nightmare we’ve created for them?

Jenquel, who recently crossed the U.S., Mexico border with her mother and siblings, speaks with volunteers.
Getty Images

The students I teach are here because their families believed the U.S. could offer them better lives, lives free from chronic violence and poverty. These very families are facing, as former U.S. Attorney Charles Oberly said earlier this week, “unexpected cruelty at the doorstep of the United States.” By turning on backs on them, we’ve rejected their very humanity, and our own.

In the years since I taught him, Pedro has become a victim of family separation. He and his older brother dropped out of school so they could work, hoping to allow their youngest brother to graduate. Pedro wants to go back to school, too, but he’s afraid he’ll be the next one deported, leaving his two brothers by themselves. He sent me two photos, one of the three boys, their arms around each other, a second of his mother and sister, now 1,800 miles away.

When I study photos of the children at the deportation centers, I think of Pedro’s little sister. At three years old, she had large brown eyes and loved singing and the Little Mermaid. I think about her, and I am both sick and heartbroken. Sick that collectively, we are too self-absorbed to demand an immediate end to this appalling treatment, that we ever allowed our nation to arrive at such a moment, and heartbroken that I’m watching my students’ families be torn apart. “Why, Ms.?” they ask me. “Why won’t anyone do something?”

I have the same question.