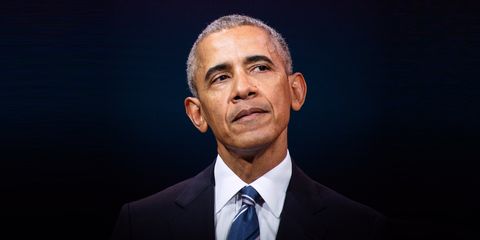 Hey-o, remember when the president of the free world thought of women as autonomous beings and not objects whose genitalia one can grab at will? That guy, who was certainly not perfect but also never practiced diplomacy by pretending to confuse the words "would" and "wouldn't," is getting pretty exasperated, too. "Men have been getting on my nerves lately," Obama informed a Johannesburg crowd yesterday at an Obama Foundation event. "Every day I read the newspaper, and I just think, like, ‘Brothers, what’s wrong with you guys? What’s wrong with us?'"

The former (but forever) president was speaking about the importance of women being involved in politics, and just how critical it is that their voices are considered equal to, I don't know, someone who has described women as "fat," "slobs," "pigs," and "disgusting animals." A women in the crowd asked Obama how he'd suggest women get into politics in a country like Kenya.

"Women, in particular," Obama replied, "I want you to get more involved."

Because men have been getting on my nerves lately. I mean, every day I read the newspaper, and I just think, like, ‘Brothers, what’s wrong with you guys? What’s wrong with us?’ I mean, we’re violent, we’re bullying. You know, just not handling our business. So I think empowering more women on the continent―that, right away, is going to lead to some better policies.

Obama was speaking specifically to politics within Africa, but it's no great stretch to suggest that he had Trump et al in mind, too. In a not-super-subtle nod to Trump's Russia snafu, he said Tuesday: "We see the utter loss of shame of political leaders when they're caught in a lie, and they just double down and lie some more."

With his recommendation for men in politics in Africa—that they should, essentially, back off and let women have a seat at the table—Obama doubles down on his self-described status as a feminist. A central tenet of male feminism, after all, is for men and male-identifying individuals to amplify women and femmes' voices. To stand back for a second, recognize the privilege that they own, and consider how to use it to raise the voices of a gender more oppressed. 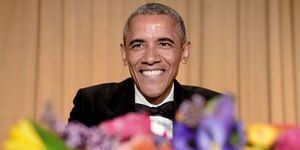 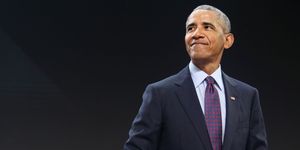 Obama Wants More Women in Power
Jenny Hollander Director of Content Strategy Jenny is Marie Claire’s Director of Content Strategy, editing and writing about everything from politics to reality television to accessories and celebrity news.
This content is created and maintained by a third party, and imported onto this page to help users provide their email addresses. You may be able to find more information about this and similar content at piano.io
Advertisement - Continue Reading Below
More From Politics
How to Help Black Lives Matter If You Can't Donate
Does Your State Have a Tampon Tax?
Advertisement - Continue Reading Below
What's Ranked-Choice Voting? Allow Us to Explain
Paid Leave for All Isn't Just a 'Women's Issue'
Yes, Caregiving Is Essential Infrastructure
Unforgettable Signs From the Protests
23 Ways Women Still Aren't Equal to Men
Ma’Khia Bryant: What We Know
Greta Thunberg Expertly Trolled Boris Johnson
The Hope and Heartbreak of Derek Chauvin's Verdict