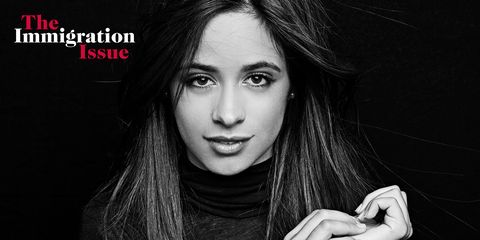 BEST KNOWN FOR: Her 2018 hit song “Havana;” member of Fifth Harmony before going solo in 2016 and releasing her self-titled debut, Camila, in 2018.

HER ROOTS: The daughter of a Cuban mother and a Mexican father, Cabello shuttled back and forth between her birthplace and Mexico City until the age of 6, when she left for the U.S. Her mother told her they were going to Disney World when they were crossing the border, and for the journey she packed Cabello’s backpack with her favorite Winnie the Pooh journal and her doll. The family later reunited in Miami, where Cabello’s mom, an architect in Cuba, worked in the shoe department at Marshalls by day and took English classes at night. Her dad washed cars before starting a construction business with his wife.

ON DREAMING: At the 2018 Grammys, Cabello, 21, delivered a powerful message about the Deferred Action for Childhood Arrivals (DACA) program, which protects qualifying undocumented immigrants brought to the U.S. as children and is currently at risk. “Just like the Dreamers, my parents brought me to this country with nothing in their pockets but hope. They showed me what it means to work twice as hard and never give up. And honestly, no part of my journey is any different from theirs,” she told the crowd. “I’m a proud Cuban-Mexican immigrant, born in eastern Havana, standing in front of you on the Grammy stage in New York City, and all I know is, just like dreams, these kids can’t be forgotten and are worth fighting for.”

ON STRIVING: “Immigrants have one thing in common: Hunger,” Cabello wrote in a personal essay for Popsugar Latina. “The hunger to do the impossible because you have no choice, because you came too damn far, because you’ve known what struggling is and you’re not going to take an opportunity for granted.” Cabello attended school in Miami until ninth grade. For her 15th birthday, she asked her parents to drive her to Greensboro, North Carolina, to audition for Simon Cowell’s talent show The X Factor.

This article originally appeared in the September 2018 issue of Marie Claire.

This content is created and maintained by a third party, and imported onto this page to help users provide their email addresses. You may be able to find more information about this and similar content at piano.io
Advertisement - Continue Reading Below
More From The Immigration Issue
Constance Wu Is Diversifying Hollywood
How Immigration Shaped These Top Female Execs
Advertisement - Continue Reading Below
Priyanka Chopra on Being a Working Immigrant
Female Leaders Share Their Immigration Stories
Famous Women Tell Their Immigration Stories
Meet the Judge Fighting For Detained Children
The Women Fixing How the U.S. Treats Immigrants
"I Was Taken to a Huge Cage"
Christy Turlington Burns' Immigration Story
United We Stand