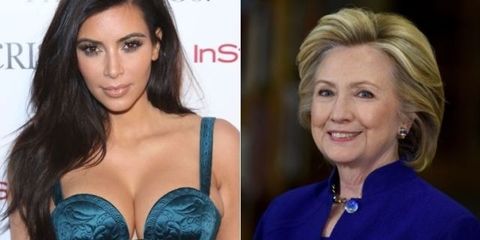 Kim Kardashian said in her recent Wonderland interview that she was "on the fence" about who should would be voting for president. It freaked some people out because Kim has famously supported democratic candidates in the past, but as it turns out, there was no cause for alarm: Kim is with her.

In a post on her website, Kiki wrote, "A 'quote' of mine was released yesterday causing my phone to blow up by friends, family and even both candidate's camps, so I want to explain the context in which I said I was 'on the fence' about my vote," she wrote.

"There was a point when I wasn't 100% sure I was even going to vote in this election; I didn't want to vote blindly. But I also thought about how not voting would mean that I wasn't making my voice heard, so I decided to talk to my closest friends and family who I love and trust, to have an open conversation about politics," she continued.

"I found that without a doubt, I stand with Hillary. I'm with her," she clarified. "I believe Hillary will best represent our country and is the most qualified for the job. This year, I'm not just voting for myself, but also for my children, and I took that into careful consideration when I made my decision."

But since she's gotta keep all her fans happy (read: buying Kimojis), the reality star finished up her post like a true diplomat. "I believe that both candidates have the intention of making the country a safer and stronger place for every American, they just have different ideas about how we get there."