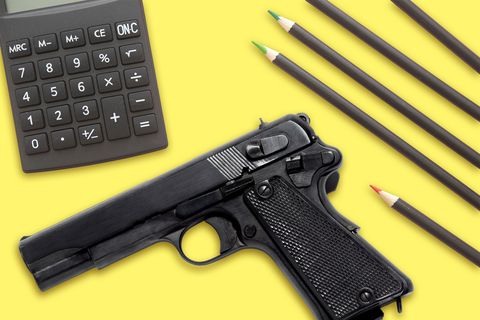 This story about school violence was produced in a collaboration between The Trace, an independent, nonpartisan, nonprofit newsroom dedicated to shining a light on America's gun violence crisis; The Hechinger Report, a nonprofit, independent news organization focused on inequality and innovation in education; and Marie Claire.

One central message of post-Parkland activism: Gun violence has changed what it means to be a student in America. Teachers say that everything has changed for them, too.

In a survey conducted by Educators for Excellence, a teacher-led advocacy group, gun violence ranked as teachers’ number one school safety concern. Arming teachers is among the recommendations offered by the Department of Education in an upcoming report, but it would be unpopular: The survey found that 65 percent of teachers are against carrying firearms to protect students from active shooters.

As educators settle into the 2018–19 school year, we asked nine teachers and administrators how they wrestle with one persistent truth about American gun violence: It can happen anywhere.

Their responses reflect their different backgrounds, experiences, and student populations. One teacher from rural Kansas worries that her small town isn’t adequately prepared to respond to a school shooting. Another recalls fielding difficult questions from first-graders after an active shooter drill. Some told us of the classroom supplies they’ve transformed into tools of survival: a cement hall pass ready to be used as a bludgeon, a ball of yarn that can double as a tourniquet band. An educator in the Watts neighborhood of Los Angeles, where violent crime is high, isn’t worried about a mass shooting: Gun violence is an ever-present threat for his students. But all teachers agree that in the America of today, their job is no longer just about helping students learn—it’s also about keeping children safe.

“The day that I have to carry a gun as a requirement for me to teach, I’m done.”

Harley Brook is about to enter his 12th year of teaching English at a public high school near Chicago.

“I have a bookshelf in my room. I used to think, I’m going to populate this with books in case a kid needs something to read. Now, every year, when I go back to restock that bookshelf, there’s a part of me that’s also thinking, This is something a kid could pick up and throw if someone made their way into my classroom. It’s mind-blowing to me that that’s something I even have to think about.

The day that I have to carry a gun as a requirement for me to teach, I’m done. I’ll find some other way to make use of my education and my background and experience. I didn’t get into this because I want ‘To teach, protect, and serve’ to be my job description.”

“I have yet to hear a student add ‘guns’ to a list of things that would make them feel safe.”

Nina Leuzzi has taught pre-K in Boston for 10 years. She is now the dean of School Culture and Community at a Boston charter school, where she also teaches educators how to support students who have experienced trauma and create supportive classroom communities.

“If I’m a kid and I walk into a school where my teacher had a handgun and there were metal detectors, I think my anxiety level would be significantly higher than if I walked in and my teacher gave me a hug, or if I knew that there were a counselor I could talk to if something happened at home that night or that morning. Those are the kinds of things that breathe safety into schools.

In my 10 years of teaching, I have yet to hear a student add ‘guns’ to a list of things that would make them feel safe. What they’re really looking for is to feel like they’re cared for.”

“This really could happen.”

Nivia Vizurraga is going into her 12th year of teaching. She currently teaches K–5 special education at an elementary school in Reseda, California.

“I have yet to hear a student add ‘guns’ to a list of things that would make them feel safe. What they’re really looking for is to feel like they’re cared for.”

“During the drills, we close our blinds, lock our doors and have our students go under the tables or somewhere they could actually hide. In the moment of the drill, it is a somewhat scary situation. After 15 or 20 minutes, the principal will say the drill is over, but then there’s the conversation that happens afterward.

The students ask questions like, ‘If someone knocks on the door, should we answer?’ ‘When do our parents get called?’ ‘Are we going to be okay?’

It’s difficult as a teacher because you want to let your children know that they are safe. But you also have to be realistic in telling them that this really could happen.”

“Would I ask a teacher to put their life on the line for my kids?”

Melissa Dorcemus is in her seventh year of teaching. She currently teaches ninth-grade special education math at a high school in New York City.

“My husband is in law enforcement. We’ve had discussions about putting his life on the line in his job. When I first started teaching, that wasn’t something I thought about for myself. I never thought I would be the person defending a room of innocent children. The thought has started to cross my mind more as tragedies keep happening.

Now, I’m pregnant. I’ve gotten very emotional thinking about sending my own child to school someday. Would I ask a teacher to put his or her life on the line for my kids? Would I do it for other people’s kids? You love them like they’re your own, but at the end of the day, they’re not.

If I do this for my class, will I be home for my baby?”

“My students aren’t worried about mass shootings. It’s when they leave school that they are more at risk.”

“We’ve never dealt with any gun violence on campus. We have had students who stay on campus longer because they feel more protected at school versus out in their community.

Gun violence in Watts is not uncommon. Whether it’s from police officers or whether it’s from gangs or the projects, it’s something students are used to. So for most of my kids, school is somewhere to get away from all that. It’s a safe haven for them. [Arming teachers] would make it even harder for my students.”

“We live in a small, rural town that has one police officer on duty and an extremely small hospital. I’m not sure it has ever seen a gunshot wound. Last spring, after Parkland, we had a full-blown active-shooter drill to test our town’s response. Student actors had fake blood on them with different injuries to test whether the hospital would be able to respond to those types of wounds.

65 percent of teachers are against carrying firearms to protect students from active shooters.

During the drill, they asked us to do what we would actually do in the situation. Once you’re in lockdown, you’re not supposed to open the door, even if you know the person, because school shooters have been students. They placed one of my best friend’s kids outside my room. She was crying. I failed. I opened the door and pulled her in. She had been ‘shot’ in the leg. I had some yarn in my cabinet, so I tied a tourniquet around her leg. If this were real, I don’t think I would be able to let a kid die out in the hallway.

I was shocked at how emotional I became. We’re at the place where I have to decide whether the kid in the hall gets saved or whether I open up my students in my classroom to possible harm. We’ve gone from ‘I’m here to help you prepare for your future’ to ‘I’m here to decide who gets to live and who gets to die.’ It’s crazy to me that that’s now part of my job.

I have an extremely heavy hall pass. My plan is to stand by the door with that. Whoever enters is going to get a face full of concrete. We’ve also got bug spray that can shoot up to twenty feet. And I’ve got a baseball bat locked away in my closet.”

“I would take a bullet for my kids, but I shouldn't have to.”

Marla Savage teaches third grade in New Jersey. This school year will be her eighth year of teaching.

“Sometimes we tell the kids that we do the drills in case there's ever bad weather or a wild animal gets in the building. But by third grade, the kids know that's not true.

During the drills, administration always walks around and checks the whole building, making sure doors are locked. When I hear our doorknob jiggle, it always gives me goose bumps. I look at these amazing, beautiful children in front of me, huddled together silently in the closet. I would take a bullet for my kids, but I shouldn't have to.”

“We need help to help these kids.”

Christina Kim is going into her 14th year teaching in the Los Angeles Unified School District. She is currently a Title III instructional coach working with English language learner students.

“You hear stories about the kids who have committed mass shootings and you hear about how they were bullied or were struggling emotionally. I wonder what situation we would be in now if we had counselors, school psychologists, or people specialized in trauma consistently working on school campuses with these students.

At one school site I worked at, we had a student who witnessed his father being arrested by cops. He saw them pull a gun on him. He was running out of the classroom all the time, bullying other kids, and pushing and kicking adults. I used all the tools I had to help him, but I realized that this situation was beyond my skill set. He was calling out for help. We needed someone who was specialized in trauma to help him. We need help to help these kids. We need resources.”

“After Parkland, I bought a baseball bat that I keep in my classroom closet.”

Michael Raney is in her eighth year of teaching. She teaches third grade in a public school district in Texas.

“After Parkland, I bought a baseball bat that I keep in my closet. I don’t know if it would be useful in the event of a shooting. But as a teacher, you want to be prepared.

When I’m doing something like buying a baseball bat or Googling ‘What are strategies to use in a school shooting?’ I just keep thinking, This shouldn’t be my problem. This is not the level at which this needs to be handled.”

Related Story
What 30 Teachers Think About Guns
Advertisement - Continue Reading Below
More From Politics
Everything We Know About Senator Warren's Husband
Mayor Pete's Husband Would Be a "First Gentleman"
Advertisement - Continue Reading Below
How a Parkland Mom Turned Her Grief into Action
He Voted for Trump. She Voted for Bernie.
How Guerrilla Feminists Are Fighting Femicide
Who Was Mayor Pete's Father, Joseph Buttigieg?
Nancy Pelosi, Icon, Ripped Up Trump's SOTU Address
Thoughts From a First-Time Caucus-Goer
And Now, a Word From the Future Voters of Iowa
Ayanna Pressley Wants Total Justice for Survivors