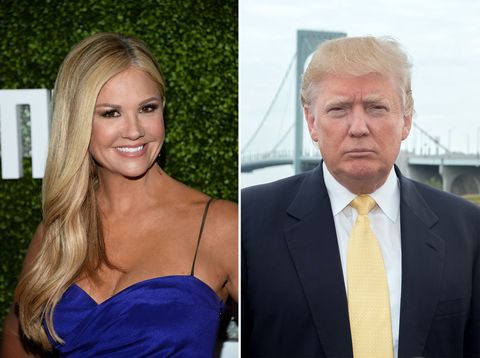 Former Access Hollywood TV personality Nancy O'Dell has been identified as the married woman Donald Trump bragged about trying to sleep with in a recently uncovered "hot mic" interview from 2005.

"I moved on her and I failed," he said to host Billy Bush in the video, first published by The Washington Post. "I'll admit it. I did try and fuck her. She was married... I moved on her very heavily, in fact, I took her out furniture shopping. She wanted to get some furniture, I said, 'I'll show you where they have some nice furniture.'"

"I moved on her like a bitch, but I couldn't get there," he continued. "And she was married. Then all of a sudden I see her, she's now got the big phony tits and everything. She's totally changed her look."

O'Dell was first revealed to be the woman Trump had attempted to "try and fuck" during a Friday evening Access Hollywood segment. However, Trump's troublesome history with O'Dell apparently extends far beyond the 2005 clip: As TMZ reports, the Republican nominee allegedly attempted to fire a then-pregnant O'Dell as co-host of the Miss USA pageant in 2007, because he didn't want a pregnant woman hosting the show. Due to O'Dell's contract with NBC, however, he was overruled.

During the same Access Hollywood segment on Friday, host Natalie Morales also confirmed that the other woman Trump and Bush discuss in the video — who Bush describes as "hot as shit" before proclaiming, "The Donald has scored!" — was Days of Our Lives actress Adrienne Zucker.

Updated 10/8 at 1:30 p.m.: In a statement to Entertainment Tonight on Saturday, Nancy O'Dell condemned the 2005 video of Donald Trump and Billy Bush, saying that "no female, no person, should be the subject of such crass comments, whether or not cameras are rolling."

"Politics aside, I'm saddened that these comments still exist in our society at all. When I heard the comments yesterday, it was disappointing to hear such objectification of women. The conversation needs to change because no female, no person, should be the subject of such crass comments, whether or not cameras are rolling. Everyone deserves respect no matter the setting or gender. As a woman who has worked very hard to establish her career, and as a mom, I feel I must speak out with the hope that as a society we will always strive to be better."